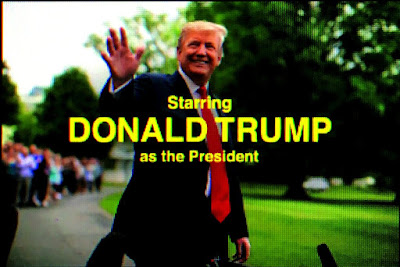 Re-reading Mystery Train, in which Marcus dared to reframe the mythology of American popular music – and wider culture – in explicitly literary terms, the careers of musicians and politicians alike compared to Huckleberry Finn and Captain Ahab and Jay Gatsby. He’s particularly cutting about a man who was, at that time, the personification of political venality and vulgarity, Lyndon Baines Johnson.

But even LBJ might have had a vague idea who Huck and Ahab and Jay were, what they meant. What, asks New York Times TV critic James Poniewozik, of a man who hasn’t even read the books he pretended to write, a veritable President for a post-literate age?


Mr. Trump has been playing himself instinctually as a character since the 1980s; it’s allowed him to maintain a profile even through bankruptcies and humiliations. But it’s also why, on the rare occasions he’s had to publicly attempt a role contrary to his nature — calling for healing from a script after a mass shooting, for instance — he sounds as stagey and inauthentic as an unrehearsed amateur doing a sitcom cameo.