The Olympic opening ceremony: being Boyled

(The following thoughts are pretty much a synthesis of about 14 different conversations I’ve been having on various online media over the past few hours. As such, they are probably neither original nor coherent. You have been warned.) 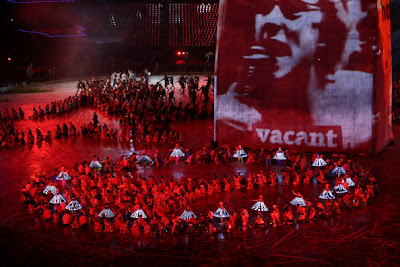 I was a bit torn a few weeks ago when the news came that the test for prospective UK citizens will contain more questions about history. On the one hand, this is something I can only applaud, because it’s impossible to understand what makes a country or culture tick without knowing how it came to be where it is. But when you get to the nitty-gritty of which bits of history should be included, things become more complex. Nelson and Wellington and Churchill, fair enough; but what about the Putney Debates, the Rebecca Riots and the Tolpuddle Martyrs? The Jarrow Crusade and the Battle of Cable Street? Too political you say? But Churchill wasn’t?

You see, even if you agree on the basic facts, there are always multiple histories, parallel, interweaving, depending on the emphasis you choose to place on those facts. And in that spirit I bloody loved Danny Boyle’s opening ceremony for the Olympic Games. His was a people’s history of the UK, Blake rather than Kipling, suffragettes rather than Beefeaters, Dizzee Rascal, not the Last Night of the bloody Proms. And the CND badge and the Brookside lesbians and, of course, the glorious in-your-face-Cameron salute to the NHS. Anything that provokes Telegraph readers into splenetic online rants about the evils of multiculturalism has to be good value.

But hang on a moment. Was it really as cheeky and subversive as it seemed? Boyle wanted to make a story about revolutions but rather than Hegelian dialectic we got phallic chimneys appearing from the ersatz countryside as the industrial revolution brought pollution and capitalism to the countryside, turning everything dark and satanic. And yet Brunel and his top-hatted, bewhiskered chums were still presented as the good guys, forging the modern age and beginning a continuum that leads inexorably to a benign Tim Berners-Lee at his desk. Take that, greens and lefties alike. And there was still Elgar and there was still James Bond, purveyor of thick ears to assorted dangerous foreign types. And yes, there was still the Queen, even if she didn’t appear to be enjoying it as much as she’d revelled in that strange boaty jamboree last month.

Baudrillard would have argued that we’re simply blinded by the razzmatazz and spectacle of the whole thing, that obscures and eventually supplants the reality, including historical reality. And sure, there were lots of fireworks. But there’s also a sense that the very real spirit of subversion and nonconformism and sheer bloody-mindedness in British history has been appropriated; what Debord and the Situationists called recuperation. Yes, there were bits of the Stones and Bowie and the Sex Pistols and Frankie Goes To Hollywood, music that shocked and disturbed when it came out. But punk rockers became a posse of outsized marionettes, far more funny than scary. It all came through the door marked HERITAGE. 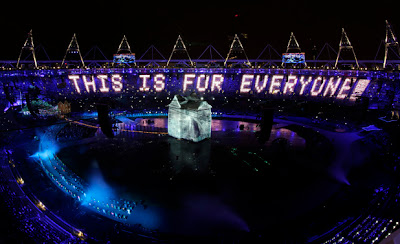 This is the problem when a nation decides to build its post-imperial identity around irony and self-deprecation, where the worst sin is to take oneself too seriously. To be truly subversive, to truly shock, Boyle would have had to come up with something utterly po-faced and self-important. A bit like the Beijing gig four years ago, in fact.

Maybe that at least would have made the Queen crack a smile.
Posted by Tim F at 6:49 pm

Funny, at the end of the London film, they played the Sex Pistols, you heard John Lydon singing "God Save the Queen"... but curiously cut it there, before the next lines, either "The fascist regime" or "She ain't no human being."

That's what is known as having their cake and eating it.
Did enjoy it a lot though.

(Someone on Twitter remarked that this is the only host city in the world that has permanent residents living here from every single country taking part, that made me proud.

Hearing about the kettling of Critical Mass in Stratford made me ashamed.)

Thank you, I value your views.

Elgar though was just an excellent composer, by Brit standards he was absolutely brilliant, and doubt whether he would have been pleased to be associated with so much flag-waving shite that seems to accompany his music.

as a member of the middle-aged, Middle Britain, middle-class chunk of society I found the evening excellent on a number of levels

interestingly, my son (who has attempted to throw off as much middle-ness as I inadvertantly pile on him) found it entertaining and amusing (a basic, altho nonetheless honest response)

a lot of the "cultural" references were beyond him (despite have studied art, he had never come across either Peter Blake or Sgt Pepper)

so it provided us with much to talk about

(always a good thing when one's offspring are concerned)

so I thank Mr B for that, at the least

(may I add, that it never fails to amaze me how many countries I haven't heard of; I felt very ashamed)

Yes, I noticed the strategic cut to Mr Lydon, Annie. A wry wink, rather than all-out insurrection. But Pretty Vacant is just as subversive in its own way and they played lots of that.

Agree entirely re Elgar, Vicus. Unfortunately, some of his stuff has become a bit of a cliché, which isn't his fault.

Thanks so much for dropping by, Inukshuk. Glad you had a moment of inter-generational bonding. But I'm shocked about the Peter Blake gap; one of the finest, wittiest British artists of past 100 years. I trust you gave him a quick burst of re-education. :-)

I read the top-hatted industrialists differently - shown to be standing their proudly congratulating themselves with folded arms while the proles did all the hard work raping their own countryside?!?

Hat's off to Danny B for getting away with what he did right under 'their' noses.