The deep superficiality of Andy Warhol


So if you’re running an exhibition featuring 260 works by one of the most famous, collectible artists of the past 100 years, you’d make a big song and dance about it, right? Right? Well, apparently not if you’re the ArtScience Museum in Singapore, where Andy Warhol: 15 Minutes Eternal appears to be doing rather less well than Harry Potter: The Exhibition. They didn’t even want to us to pay for our tickets; we just needed to photograph ourselves amidst the soup cans and soap boxes strewn around the foyer – simulacra of simulacra, extra postmodern points there guys – and we were waved in.

In many ways it’s an impressive show; the pieces range from very early sketches to his photos of the ugly/beautiful denizens of New York’s mid-80s club scene. As with several other artists often dismissed as charlatans – Pollock, Klein, Emin – you need to get up close to the real works to discern that Warhol could actually draw and paint. 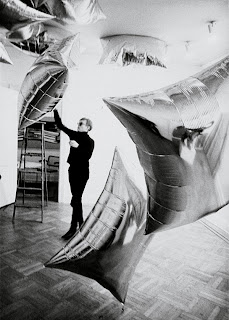 But hey, this is the 21st century and interactivity is the watchword, so the punters demand more than just a bunch of pictures in a bunch of rooms. You can don a ratty wig and be Andy for a while, toss around big, metallic balloons, watch audition films for wannabe superstars and rehearsal footage of the Velvet Underground. But this is a slightly sanitised version of Warhol: his nickname, Drella, was a synthesis of Dracula and Cinderella, which would suggest that he wasn’t exactly what you might call a nice guy. His sexuality, his voyeuristic tendencies, his fondness for ethically questionable clients such as Imelda Marcos are all glossed over. I didn’t even notice an acknowledgement that he was bald. There’s a nice mock-up of the Factory itself, because we all wish we’d hung out there, don’t we? In your own 15 minutes are you Lou or are you Edie? But what it really needs is for someone dressed as Valerie Solanas to burst in, wielding a .32, come to hunt down her own personal Voldemort.

I bet they’re already planning 50 Shades of Grey: The Exhibition. But with all the sex taken out.
Posted by Tim Footman at 8:38 am

I can't think about Andy Warhol and the Factory anymore without thinking of the French and Saunders sketch.
I learnt more from that sketch than the Warhol exhibition I attended!
Sx

Yes, Scarley! (That's the sketch with Nigel Planer as a permanantly comotose Warhol, isn't it?

Very pleased to hear you say that he actually could draw and paint - I confess that I've never got up close to any of his real works, mainly because I'd assumed that 'real' wasn't something he ever did. I wouldn't loved to have been Lou for 15 minutes, though... minus the smack adition.

Yes, that's the sketch! They even had someone impersonating Joan Bakewell... I think I'm going to have to watch it again now.
Sx

Thanks for reminding me of this, guys.