Julian Assange, Pussy Riot and the sacred art of fence-sitting 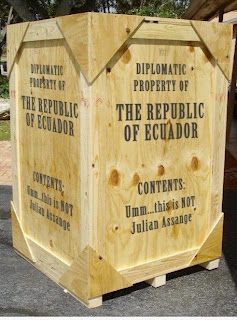 When it comes to the subject of Julian Assange, it appears that agnosticism is not an option, at least not in polite society. But I really don’t know whether he should be deported to Sweden or spirited to Ecuador or asked to stay on in London for the moment in case England’s batting line-up needs further bolstering. Pundits of impeccably leftist credentials such as Owen Jones and Cath Elliott have snapped at soi-disant liberals whose support for Assange appears to trump any sympathy for the women who accuse him of raping them. I certainly see their point, but A-HA! say the conspiracy theorists, this is why St Julian’s opponents have framed him as a sex offender: they know it will cause divisions among his instinctive defenders, whereas an accusation of, say, bank robbery (the offence that the South African secret services tried to pin on Peter Hain) wouldn’t be taken as seriously. Had Assange been accused of something else, would Jones or Elliott have been so eager to distance themselves? And, for that matter, if he had been accused of saying something rude about Islam, would George Galloway now be so steadfast in his defence? Rape is a heinous crime and accusations of rape need to be taken seriously; even in democracies, there are some people in positions of power who are prepared to use underhand means to silence those who oppose them. Neither of those is a particularly outrageous point of view, but right now it seems to be difficult to hold both of them at once.

I’m less conflicted about the case of Pussy Riot, the Russian punks who were sentenced yesterday. Modern Russia is a corrupt, dysfunctional plutocracy and the fact that Putin has managed to get the hierarchy of the Orthodox church onside just adds a thick layer of mumbo-jumbo and a dash of misogyny to the ghastly cocktail. The three women should not be in prison. But (you knew that was coming, didn’t you?), they were fully aware of who they were going to upset and what was liable to happen when they made their protest inside the cathedral in February; otherwise there would have been little point in doing it. Let’s be honest, if the verdict had come through yesterday and they’d been found not guilty and Putin apologised for the misunderstanding and said he loved their records actually, their righteously, rightfully indignant supporters around the world would probably have felt a little let down. Like Eliot’s Thomas Becket, they were seeking martyrdom and Putin, the clown, has handed it to them. I’m not entirely sure what Assange is after, or whether the weird dialectic created by his opponents and supporters will hand it to him or not. Adding to the confusion is that the three defendants in Moscow come across as fun, feisty broads with whom you’d like to have a pint; Assange seems to be a pompous dick. Which shouldn’t matter, but it does.

And there’s another paradox. Pussy Riot were caught bang to rights. We may not like the law they broke, but it’s pretty clear that they broke it. Even if Assange were to stand trial in Sweden, no verdict would satisfy everyone and the conspiracy theories and other grumbles would persist. Perversely, the legal process in Russia has been far more transparent than what’s happening with Assange in the nominally free and open West. 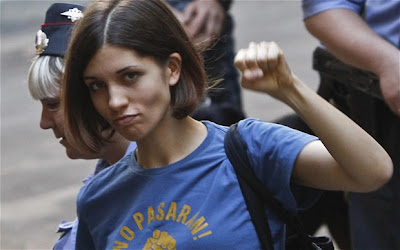 Sorry, I can't get past that surname.

Personally, I'm very excited about the inevitable Pussy Riot biopic. Especially once they stage the inevitable jail break from their maximum security gulag.

Pompous dick? Blatant case of narcissistic personality disorder I'd say. I sincerely doubt that anything he has done has any higher moral purpose than his own aggrandisement.

Thanks for keeping me abreast of the interesting (and potentially incendary) Pussy Riot - The Plastic People of the Universe, anyone?

Hmm, George Galloway - and indeed Vladimir Putin, I read - are steadfast in Assange's defence. I dunno what to think. He's too blond though, surely - no wonder Sweden want him back so badly.

Assange's twattery is a stumbling block to sympathy, certainly.

I too suffer from the same doubts - he has made his name in illegally publishing secret material, but what was the point? Surely he would want to be a martyr to strengthen his point?

The other thing is, if he's innocent, why not show up and clear his name? Perhaps I'm being completely naive and there's some vast worldwide conspiracy to knock him down. In which case, why would the CIA's black opps units not just kill him with one of those funky umbrellas?

I know, Roland. Maybe he was bullied, which would explain a lot.

Any casting ideas, Rol? Maybe they could reunite the Charlie's Angels trio.

I know what you mean, GSE. Although he has done some good, if only by accident.

Definite overtones of the Plastic People, Gadjo, albeit less hairy.

The whole Sweden thing does seem a bit long-winded if it's a stitch-up, Sam. I would have thought the easiest thing would be to frame him as a CIA mole.

Actually, that's a point. If the US know that their communications are going to be leaked anyway, they just pepper them with references to bundles of cash and free drugs and hookers going to "our very good friend Julian". Would Wikileaks leak that? They'd be hypocrites if they didn't...

Well, the girl you pictured has a look of Katie Holmes about her. Not that Katie Holmes could pull of a Russian punk singer, but I guess she's going to have to do something with her time now she's escaped the Cult of Tom.

Assange doesn't want to go to Sweden because of fear that they'll extradite him to the US, where the people he's embarrassed will railroad him. Pretty simple, really. And the US hasn't exactly been a paragon of legal virtue lately.

Neither have the Swedes, actually -- however heinous a crime rape may be, The Swedish government has not charged Assange, which clearly means they lack evidence.

Extraditing Assange for *questioning* makes no sense whatsoever -- it's an intelligence test that a whole lot of people seem to be failing.

If all they want to do is ask questions, and if Assange does not wish to travel to Sweden, what prevents the Swedish police from traveling to England?

Or what, specifically, can they not accomplish that way?

whatever Assange may or may not have done - he is deliberately avoiding the Swedish legal system and the Engkish legal system - jumping bail. It is possible that both these systems have imperfections that occassionally lead to the miscarriage of justice. The media scrutiny of his case will make it very difficult for anything other than a well investigated thorough and faiur process to happen. His avoiding facing the legal systems of these two countries is, in my eyes, his main obvious crime which undermines his creibility.

Tom - the Swedes have explained that the way their system works means they can't charge anyone until they've arrested them. Besides, surely it would be easier for the US to extradite Assange from the UK when he's here already? It's not like we're particularly shy about handing people over.

I found this NewStatesman (Dave Allen)summary of common misconceptions about the situation provided useful framing persective.