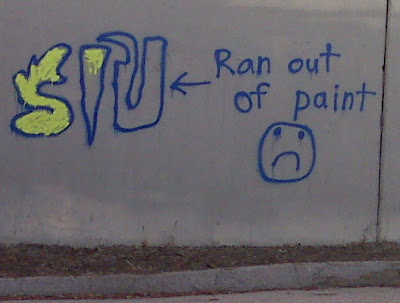 Context determines much about how we perceive art; graffiti is an eyesore until it’s determined to be by Banksy or John Lydon, at which point it goes into a gallery or becomes appropriate raw material for academics to ponder. And that 120-year-old Ecce Homo fresco in a church in Zaragoza is rather more famous now it’s been, um, restored by a parishioner and, I guess, a bit more valuable as well.

So I was immediately sceptical when nice residents of a nice street in a nicer bit of Newcastle claimed to be discombobulated that their nice cars had been vandalised with words such as “VERY SILLY” and “ARBITRARY”, spelled correctly and all. The Daily Mail in its wisdom has decided that the culprit is one Stephen Graham, a professor at Newcastle University where he focuses on cities, technology and surveillance; here he is on the subject of London’s Olympic lockdown. I should stress that Graham has been arrested and charged, but not convicted of any offence, so someone at the Mail should really get a major bollocking some time this morning; but still, I’d guess that having one’s Merc or BMW etched with what may be the initial notes for a groundbreaking thesis on ostentatious consumption by the bourgeoisie of North-East England would double its resale value at least. If I were a well-off car-owner in Jesmond, I’d be slipping Professor Graham a research grant to enable him to scratch a bit deeper.
Posted by Tim Footman at 7:20 am

I live right near there and most of the properties are two bed flats, not mansions. I would've been livid if my small 2001 hatchback was scratched!

Car vandalism knows no class boundaries. I was shocked once to see a Chelsea Tractor in Crouch End with 'stop blocking my drive' scratched onto it. This was in an area with £1m+ houses.

Anon is right - that looks like Tyneside flats rather than houses. I used to live in one and while they are nice flats they aren't exactly top of the range.

Given that Graham is found guilty of the offense then he should be made to pay double the cost of the damage he has caused. Half to the car owners and half to a charity.

Graham is a fully paid up member of the parasitic public sector. Over paid, over pensioned, too much holiday and little accountability. The wretch does not understand the real world from his cosseted tax funded life.

Sack the wretched idiot as I for one would not want my children to be "educated" by such an irresponsible clown.

If the Prof really dunnit and his legal team are on the ball, the DM ruined any chances of CPS proceeding by leaving their comments section open for about twelve hours (with numerous comments in the style of Pluck's above being left). If his solicitor gets a screenshot of that, he's got away with his, uh, critique, done his public image among radicals a favour and no doubt boosted his book sales 1000%. Funny old world.

I think he's raised the tone of the form, myself.

Yes, Anon, I was suspicious when the DM didn't list the market value of the properties.

I think things would be much more straightforward if the middle classes marked out their territories by pissing and shitting in the street, GSE.

Well, Pluck, he's not been found guilty, and the DM has hastily rewritten the article and deleted all the comments that assumed he had been. But apparently he's guilty of a much more heinous crime, that of being a public sector employee. The utter bastard. What punishment is appropriate in such instances, do you reckon?

Hello, Anon. (A different Anon?) Yes, I thought it was all rather sloppy on the part of the Mail. Do hacks and editors not get any legal training these days?

Well, yes, FN. All nicely spelled and only going for the expensive, slightly vulgar cars.

Yes, his real crime is being an academic, and thus part of the evil public sector, with too many holidays, etc. Speaking as one who actually knows that syatem (i am a parasitic academic myself), i can say that academics these days are worked to death. Most academics under 50 work every day (we don't just teach, we also have to reasearch and write, as well as deal with an increasing amount of administrative bureaucracy), thus this idea that we have the summers 'off' is just ignorance. It is a hard working, competative and pretty high stress choice of career. Thus there is a lot of alcoholism in the sector. Hiven the time of day (1am), i would reckon that alcohol played a part in this case. Stephen Graham is a big name in his field. To get where he is he would have to have worked pretty hard. He's no slouch, that's for sure. He's just obviously done something pretty stupid which will likely get him fired from his job. Say way you want about that. But comments about him being a public sector worker are stupid and ignorant.

We used to subcontract that to dogs till it was made illegal.

"the bourgeoisie of North-East England"?

Reminds me of this cartoon.

Back again to second another anon. Most of the academics on my course were working ridiculous hours - 70-80 hour weeks consistently, in some cases on nominal part time contracts so they were only paid for about 25 of those. It's not an easy job at all. But given Pluck's opening sentence, I suspect he hasn't had too much contact with academia, so he can't be blamed for not knowing that.

Right, I loosened up the comments restrictions because it was all getting to be such a pain in the arse. But could anonymous posters give themselves some sort of name, otherwise it looks as if it's one person called Anonymous, which is just silly.

And this Anon (presumably a different one) and GSE; yes, agreed.

I think there are about five of them, Spin.

Damn, I was looking for that, LC. Wasn't it originally in the lamented Journal of Silly?


The fact is Stephen Graham plead guilty so there will be no trial just a sentence given . He has vandalized over 200 cars over the last 10 years .Not a one off drunken night.The cps will drop those earlier cases for a guilty plea and save a trial cost(often happens).
Graham will avoid prison(put your life on it) you or I probably not.People who feel sorry for him probably would not if they go to work one day to find every panel of there car scratched to the metal with a random word like wrong.Sorry about my grammar (for Grahams academic pals)

I could respect this man more if he had the bottle to own up to his acts and justify them.As it stands he says he has no memory of events.A cowardly crime and a cowardly response when caught.Does not deserve the 80k a year tax payers give him.But no job loss or prison, that is "wrong".

He's vandalised over 200 cars in the last 10 years? What utter nonsense!

Considering the full facts surrounding this case, including the medical evidence (none of which have been reported of course), the current situation is probably the fairest outcome.

Stephen Graham was vandalizing cars in 2005 . I know because he scratched wrong on my car then.

To vb , the current situation is that he will be sentenced friday so how do you know what the outcome will be. The medical evidence is utter nonsense to get him a lesser sentence.

200 cars in the last 10 years is conservative.That figure is just the reported incidents.