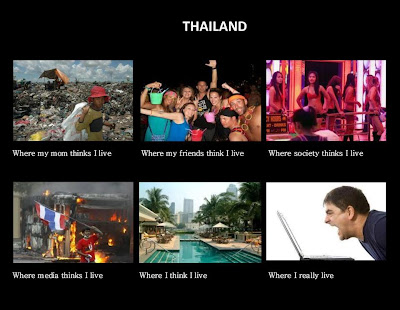 If you’re not on Facebook you may not have encountered the above image or its many, many variations: essentially someone picks a job or a location and finds six pictures that illustrate six different perspectives on it. I think I first saw it on about Tuesday or Wednesday, and it was already getting tired by Thursday evening. If there’s a single phrase that seems to characterise modern society, it’s “easily bored”. Remember Benton/Fenton the out-of-control labrador? Within days of his arrival on YouTube the very mention of his name was enough to provoke guffaws from the audience of Radio4 comedy shows; a week later, he was utterly forgotten. If you go for a more-leisurely-than-normal poo, it seems, you’ll find you’ve missed seven flavours of the Zeitgeist by the time you’re finished. Actually, do they still have Zeitgeists?
Posted by Tim F at 6:43 am

I was tired of this "meme" about two minutes after it arrived. It had to be one of the most tedious of late.

Though the Internet is a fickle beast, you're right.

The internet is mainly about our insatiable appetite for gossip, that's my conclusion. Sometimes I find myself explaining things seen on Twitter, for example, to people who don't use it. Half of me thinks 'dude, you're so out of touch' and half of me is aware of a pitying look in their eye.

Your friend Toby Young was at a dinner party last night where none of the other guests were on Twitter. Fortunately we all saw the funny side.

What Dave said. Or used to say.

I haven't seen this before as my finger is not always on the pulse of popular culture... I'd probably have the same picture of the library in all categories for 'where I work' to be a 'wag' - but that's probably been done to death too. I'm just so last week. *sigh*

I quite like working in an environment where this computer marlarky is still considered a new-fangled idea.