Marks will be awarded for showing your working 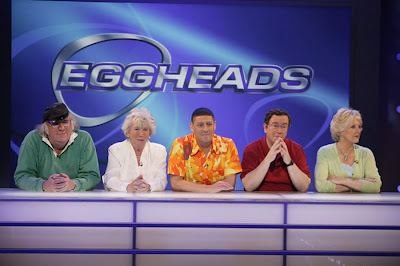 I've been catching up with Are You An Egghead? In many ways, it's something of which I approve, a consciously difficult quiz show (there's no quantitative way to measure these things, but I reckon the level of the questions is rather tougher than those on Mastermind or University Challenge), presented as mainstream tea-time entertainment. Moreover, it's real Revenge of the Nerds stuff: those of us who never got the girl, and always wore the wrong trainers, can only gloat at the elevation of geeky brainboxes to the role of tea-time sex symbols. One of the most glorious moments so far was when one bubbly contestant from Coventry selected the diffident polymath Kevin Ashman (second from the right in the picture) to join her team, because she fancied him. For those of us who always got picked last for football, it was something special.

One quibble, however; the contestants are encouraged to explain how they negotiate the multiple-choice brainteasers. I suppose this is laudable, making the retainment and regurgitation of arcane knowledge more accessible to the casual viewer; rather than just sucking it all in as gloriously incoherent combat, a sort of cerebral version of the sumo coverage Channel 4 used to offer in the good old days, the punter may actually learn something.

But for those of us whose sole talent is knowing a tiny bit more than most people about Jacobean tragedy or soul music or the birthplaces of England cricket captains (Ted Dexter? Milan!) will understand it isn't as straightforward as that. Very often, as Alistair remarked in a response to my previous post, with reference to sell-out 80s Goth combo the March Violets, "I Just Know That". I've got no idea whether I picked it up from a book, or a geography lesson when I was 13, or an explanatory sign in the V&A, or even from watching a TV quiz show. I Just Know. And watching people who also Just Know desperately trying to concoct a plausible post-hoc justification for why they've decided that the answer's Borneo, rather than Viscount Palmerston or the square root of π, is a little bit tiresome; for a start, it requires self-examination, and that's one thing we botched and bungled geeks really don't like doing in public. (There's a similar tendency in Mastermind, when Humphrys has his little chats before the general knowledge rounds; fair enough if you want to talk about the specialised subject, but the "so, you're a policeman, do you get annoyed with all the form-filling?" delving can make for pretty uncomfortable viewing.)

So, respect to Olav Bjortomt, one of the few contestants with the cojones to say "I know this one", and leave it at that. I'm all for opening up the world of pointless trivia to as wide an audience as possible; but let's retain a little mystery, OK?
Posted by Tim F at 7:10 am

Pub quizzes are the only thing preventing the wholesale closure of British hostelries.

I'm OK on quiz machines, which usually pays for a pint and a packet of pork scratchings.

Cary Grant was From Bristol. Not a lot of people know that.

They're an incongruous bunch, aren't they? Like Time Team has been infiltrated by the WI and Baywatch.

A cricketing colleague (born in Mulben, like Julio Iglesias) and I were once banned from an Elgin bar not for conduct liable to lead Scottish education into disrepute but for repeatedly emptying the quiz machines and treating the entire saloon bar company.

We weren't allowed back in until they'd taken the machine away. Apparently it was moved to Dingwall, where the likelihood of such a thing happening again was deemed to be remote.

At the end of an episode of Eggheads when the eggheads themselves win, Dermot always says "Eggheads have won again. Can anyone beat them?" and I keep wondering if that's supposed to be a pun or not.

"I live on a houseboat in an estuary...which is handy for my work with the Thames Water Authority..." etc. etc.

I am patently more of a Humpty Dumpty than an egghead.

He was also an acrobat, Garfer. But the jury's out on whether he had a thing with Randolph Scott.

That's the spirit, Murph. But I don't think he was ever captain.

They'll be mortally offended in Dingwall, Christopher. Well, the ones who can read.

What I love about Dermot, Geoff, is how pleased he gets when he actually knows an answer; there was one about Jens Lehmann the other day. With O'Leary, you wouldn't even get that occasional ray of sunshine.

Both Dermots are gooners, I believe.

Which reminds me, is three players the most Pompey have ever had in an England side?

That's the one with the Leonard Cohen song in it, isn't it?

You should enter my pub quiz some time. You know. When you're strolling past, um, Manchester, on your way to... er... well, okay, it may be a little off the beaten track for you.

Possibly Bob. But do the Arse have three players who are even eligible for England?

I'd be delighted, Roland. I'll brush up on my Fall lyrics and the symptoms of rickets.