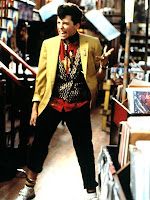 You know when you're dreaming, and something in the dream startles you so much that you wake up?

Well, there I was, back at school, as I so often am in my dreams; I'm sure many of you do the same thing. Specifically, I was on the path between the art block and the science labs, the one that led past the Goodfield block (named in honour of a headmaster who'd dropped dead on the tennis court, if I remember correctly). And, because life in dreamland is really just one big movie, there was a soundtrack; a not-desperately-good, defiantly 1980s cover version of the Stones' 'Miss Amanda Jones'.

And (maybe I should have realised I was dreaming at this point) I was dancing. Dancing madly to the music on the soundtrack, dancing up the path to the labs. I was still dancing as I went into the lower biology lab, vaguely remembering that it was also my form room when I was in the third year. There were some people in the lab, and they seemed to appreciate my moves.

And I caught my reflection in the mirror that seemed to be provided for the purpose, and realised I was dressed in a garish thrift-store outfit, quiff, jacket sleeves rolled up, that could only exist within the confines of a John Hughes movie. And yes, I was Duckie, lovelorn geek hero of Pretty in Pink. But...

"Bollocks," I thought. "The jangly version of 'Miss Amanda Jones' wasn't in Pretty in Pink. It was in Some Kind of Wonderful."

And that's when I woke up. Roused from my slumbers, not by subconscious fear or embarrassment, as a normal person would be, but by my own pedantry.
Posted by Tim F at 9:51 am

"...between the art block and the science labs"

Ah yes Tim, brilliantly subtle stuff; stranded, as we all are, between the realms of mystery and science. Only when asleep do we truly exist. And only the English could find cause for embarrassment even in the twilight zone.

I was in my twenties when John Hughes films were around. I got the same disconnected "too old" feeling I did when I used to watch Grange Hill when I'd left school. Plus the extreme sadness that there'd only been one girl at our school - not really enough to go around 400 boys.

Our tennis court was only used for tennis by our one-armed art teacher who used to serve aces past those kids who were crap at cricket (and tennis).

As i started reading the post, and as my eye caught the Ducky photo i was already thinking, hang on, wrong film reference... So yes, if it were me dreaming the same incident, i would have awoken for exactly the same reason. Probably. And if i had remembered the dream at all, which is unlikely.

Plus, do i get a point for adding it was The March Violets, and that for some reason I Just Know That...?

Duckie! i love those movies. a complete sucker for john hughes teen movies.

and Miss Amanda Jones! my real name is Amy Jones and when i was a wee teen with a mad crush on Mick Jagger, i was certain he sang that song for me. it's MY song. MINE!

An English Twilight Zone, Bob? With Rod Serling replaced by, say, Kenneth Kendall? I'd buy it.

And there I was, Alistair, thinking I was the saddest person in the universe. March Violets were a bit arse, though, no? At least by the time they recorded that.

Ooh, you again, Geoff. Yes, the immortal Honky-Tonk. But I always preferred the toothy vicar.

And so are you, Annie.

Ah, but Amy, if you watch the film, the truly hot babe isn't Amanda, it's Watts (Mary Stuart Masterson).

Him or Sandy Gall

ah, but Tim, I wasn't interested in the hot babe. I wanted Duckie. I knew a boy like that would appreciate my own weirdness.