Titanic: my heart will go on, but only when the stars are in the correct alignment 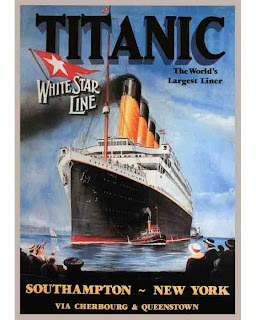 Today, as you may have noticed, is the 100th anniversary of the sinking of the Titanic. I was just about to type “so what?” but I don’t entirely mean that; so many people these days have such a sketchy grasp of the past, as anyone who watches Pointless could tell you. (My favourite example of this was a contestant who, when asked what she hoped might come up in the forthcoming show, said “anything from the last 10 years or so,” which would have been pretty much par for the course, had she not previously revealed herself to be a history graduate.) Obviously it’s a good thing that the mass mainstream media is giving at least passably serious coverage to something – other than the bloody Nazis of course – that happened way in the olden days. And yes, it really did happen, as one or two Twitter users have belatedly discovered. Although I’m sure there were a few foil-hatters around in 1912 who reckoned it was a hoax or an inside job or some sort of Jewish/Masonic conspiracy.

What I don’t get is why this hoo-hah, including commemorative cruises, a new requiem, a 3D re-release of Cameron’s idiotic movie, even recreations of the final meal (but only the first-class menu, oddly enough) all has to take place right now, purely because it’s a specific number of days after the original boat/ice interface. If we need an anniversary to focus our collective attention on the events, it suggests that the story wasn’t compelling enough; should we forget about it for another century? But then I’ve never really been bothered about birthdays either, and don’t get me started on the bloody Jubilee.

Which is why I have every sympathy for the comedian Alan Davies, who has been pilloried for asking why today should be held sacred simply because it’s 23 years since the Hillsborough disaster. Yes, it was a horrific incident, 96 innocent people died, and the suffering of their families has been made far worse by the apparent collusion of police and politicians to cover up the incompetence and negligence that allowed it to happen. But that was the case yesterday (when Liverpool played and won) and will also be the case tomorrow. The families don’t need a calendar to remind them.
Posted by Tim Footman at 7:18 am

For once I am in disagreement, and spend much of my life commemorating anniversaries. Today, for example, marks the anniversary of the death of Abraham Lincoln. I shall be going to the theatre, wearing a ridiculously large hat, to piss off the people sitting behind me. Some people ask for trouble, don't they?

I'm fascinated and appalled in equal measure by these kitsch public displays of emotion regarding tragedies to which the "mourners" are not personally connected. The Titanic and Hillsborough are the disasters du jour, but from Remembrance Sunday (which is starting to resemble a McCarthyite witch-hunt) to the trembling upper-lips at Royal Wootton Bassett, modern life is starting to resemble a compulsory perpetual wake. This simply did not happen 30 or 40 years ago. I can't help feeling it says something important about our society. Quite what it says, however, is harder to pin down.

Not a new thing, but I do like this spoof

It's better than the alternative, Rog.

As long as you wear something in addition to the hat, Vicus, I'm happy.

Public displays of religiosity have been superseded by a sort of decorous niceness, Philip. It's just as horrid.

Damn, I wish I'd seen that, Billy. Iceberg, Goldberg, what's the difference?

It does, Carolyn, but that's not one of them.