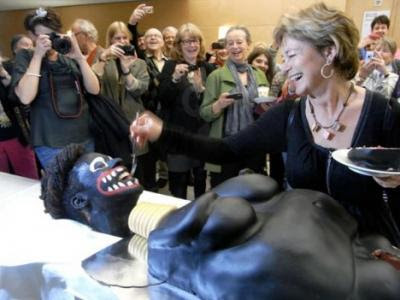 Swedish culture minister Lena Adelsohn Liljeroth has come under fire for cutting a cake designed to resemble a stereotyped African woman, although surely a smidgeon of opprobrium should fall on artist-cum-pâtissier Makode Linde, who also makes himself part of the installation, taking the role of the woman’s head, and screaming as the knife goes in. But things become even more confusing when one learns that Mr Linde is himself black and intended the piece to highlight the issue of female genital mutilation. It’s political correctness gone spongey, that’s what it is. 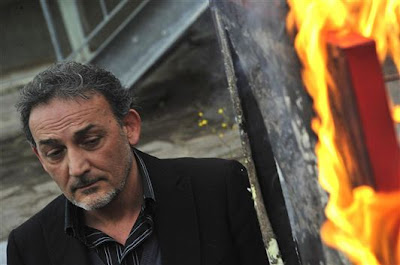 And then there’s the news of Neapolitan museum director Antonio Manfredi, who has protested against cuts in state funding by setting fire to some of his paintings. He’s doing this with the full support of the artists concerned, although surely they must have realised that Manfredi is making a bigger aesthetic statement than their own daubs could ever have managed; and the charred wisps will probably be worth more than the original canvases. If only the Momart people had thought to put such a spin on their unfortunate conflagration in 2004.

Apparently Manfredi also has form on the race front, having in 2009 impaled a life-size model of a black woman on the museum gates; but this was a dig at the mafiosi who control the African prostitutes in Naples. So that’s OK then.
Posted by Tim Footman at 8:08 am