Thailand and the racist doughnut 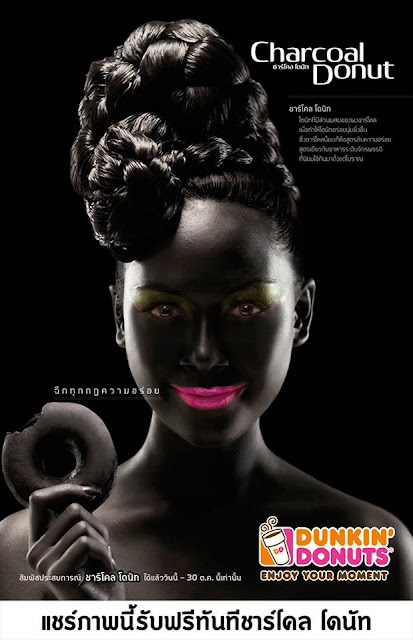 An advertisement for Dunkin’ Donuts in Thailand has provoked outrage and embarrassment; not in Thailand but in the United States, where accusations of racism have been levelled.

OK, let’s look at this. It’s a picture of a woman with her skin painted black. Clearly in the US and elsewhere in the West, this has connotations of blackface and minstrelsy with which we are now distinctly uncomfortable. But in Thailand it doesn’t. It’s a picture of a woman with her skin painted black, to match the colour of the product being advertised; just as a British TV presenter appeared a few days ago with her skin painted silver. If the DD ad were to run in the States or in Europe, I could see the problem. But it isn’t; it’s running in Thailand. And yet, because it offends the sensibilities of Americans, it gets pulled. It might be overstating matters to say that the withdrawal of the ad is in itself an act of racism, but it’s certainly an act of cultural imperialism, its close cousin. And yes, ultimately the Dunkin’ Donuts brand is owned by a US company; but doesn’t this whole story demonstrate the extent to which the American hegemony is maintained as much by twerking Miley and Affleck as Batman and crappy fast food as it is by threats to bomb Syria?

Of course, racism goes on in Thailand and it’s far closer to the surface; I don’t think there’s a Thai phrase analogous to “I’m not a racist but...”  Thai racism, though, is inextricably bound up with class consciousness, with a distinction between those who work in the fields and those who lounge in air-conditioned luxury. When another doughnut brand, Krispy Kreme, launched in Thailand a few years ago, rich kids sent their maids and drivers to stand in the long queues on their behalf. This is the issue that’s been dividing Thai society over the past decade, provoking those running battles and burning buildings you occasionally see on TV. And if the activities of Dunkin’ Donuts’ Thai franchisee need any moral scrutiny, maybe it’s over the fact that the model in the advert is the daughter of the CEO.
Posted by Tim F at 6:18 am

So we don't forget, Thai students from Chulalankorn University placed Hitler among their collage of superheroes about 3-4 months ago. Personally, knowing their educational system I was surprised that the Thais even knew who Hitler was--but they probably probably got their pop history from Quentin Tarantino. Thais also walk around the street wearing T-shirts that say "F**K You" (but full spelling) and "Hey Mother F**ker", blissfully ignorant of the impression they are making on farangs (that's us westerners), and they could care less. Racism is rampant in Thailand (and other Asian countries--gaijin (sp???) in Japan. Thais don't let westerners in Japanese bars, they don't let Indians into certain bars, they don't let Arabs into certain bars, they don't let Blacks into certain bars -- and they don't even let Thai males into bars frequented by westerners. They don't live up to our imho sometimes stupid and contrived PC standards--they could care less--if you are not Thai, you are a second class citizen, discriminated against, and inconsequential in their society. That being said--get over it, it's their country, and they rule it as they see fit. I won't even get to age discrimination, being that if you are over 30, you basically can't find a good job and they like their workforce young, energetic to their way of thinking, and somewhat ignorant to our way of thinking. Their news shows carry little news ouside of the country, and opinions about politics and world events are often proferred by soap opera stars, music singers, moies stars etc who are rarely over 30 -- and haven't lived long enough to form an opinion. Most high school students would be hard-pressed to identify neighboring or other Aisain countries on a map (so the Thais have a lot in common with us on that account). If you want to take Krispy Kreme to task, do so, they are a US Corporation and should know better, but changing the culture and thought process of the Thai people--that's a slow process. Remember they still have "lese magiste" laws making insults, however innocuous against the king punishable by imprisonment or even death. Grasp that thought citizens and you can see how inconsequential this blackface advertisement is to the Thais. Did I mention that one of their best selling toothpastes had a blackface man on the box until about 2 years ago?

Many sound points there, wittleus, some of which I covered in this post and also here.

Yeah, the long reach of America is a worrying thing. And, as ever, it's probably stupid white people objecting at the perceived slight. And the outraged publicity probably did wonders for sales in the short term. Did they pull the donut or just the advert? Yeah, I thought so...

But I have to ask, just between you and me... was it a nice donut?

I need to digest the idea that Thailand would even want a Dunkin' Donut franchise, not to mention a "charcoal" donut, before I can consider any allegations of racism. Baby steps. And the nepotism, well, that seems to be the same regardless of country. I like your writing.