The Descendants: muck this for a laugh 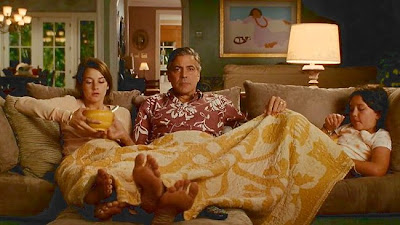 I’ve only just got round to seeing last year’s The Descendants, directed by Alexander Payne and featuring an Oscar-nominated performance by George Clooney as a man facing up to the imminent death of his wife. And it was good; sensitive without being sentimental and peopled with flawed but ultimately sympathetic characters. But either you know that already, having seen it, or don’t care, having decided not to; I’m assuming that I’m the last person on the planet who did want to see the thing but was too idle to do anything about it. The only serious flaw was ultimately my own fault; I watched it on a plane.

It wasn’t the small screen size that disrupted my enjoyment, nor the guy in front of me experimenting with his seat incline. Nor was it even the nasty, rigid headphones. No, it was yet another example of the infantilisation that everyone has to undergo when they step on a plane these days. OK, plastic cutlery and having your toothpaste confiscated, I can grudgingly see the point of that. but censoring every film to make it suitable viewing for a Victorian maiden aunt doesn’t make me feel safer; it makes me want to commit acts of random violence, possibly involving duty free goods.

OK, let’s deal with the obvious ones. Air passengers aren’t allowed to hear the word “fuck” or variations thereon, even though I’m sure they get muttered sotto voce every time someone is told to remove his belt at security. In this version of The Descendants, there are two alternatives. When it’s used as an all-purpose modifier (eg “What’s your fucking problem?”), the syllable is replaced by “freak”. When it’s a transitive verb, however (a usage that comes into play when Clooney’s character discovers his comatose wife had been unfaithful to him) we get “Did you muck my wife?”

So far, so Harry Enfield. But the swearing in The Descendants actually serves a purpose, indicating Clooney’s clumsy attempts to impose a little discipline on his variously dysfunctional offspring. So when his younger daughter calls her sister something odd but innocuous like “motherless girl”, Clooney’s response is to berate her for her bad language; an exchange that only makes sense if you know the phrase is a stand-in for “motherfucker”. And if you know language like that, surely you’re already corrupted.

That said, it’s not just George Carlin’s seven words that cause problems for the inflight Bowdlers. They also have to contend with the warriors/worriers of political correctness, such as this blogger who objected to the use of “retarded”. Again the word becomes the subject of an exchange about appropriate usage, although Clooney’s character is the bad guy here; but because the word itself isn’t heard, the whole scene is effectively meaningless. (The dubbing is particularly inept here; I assume they tried to replace “retarded” with “repugnant” but it ends up as something like “retugnant”. Which is potentially a good word, and I must think of a meaning for it some time.)

But the best moment comes when the elder daughter is trying to convince Clooney of his wife’s infidelity, explaining that she saw her going into a house with a man. Clooney suggests there must be an innocent explanation, but the girl’s having none of it: “He had his hand on her arm,” she says. But I don’t think she really said “arm”.
Posted by Tim F at 11:18 am

One wonders whether some things were simply cut. Who knows, the original might have a really nice shot of the wife's arm.

i no longer watch movies on planes for that very reason, sugar! i also don't use my computer or listen to music. i use the time to sleep. i just saw that movie last month, right here in the comfort of my own home. i liked it! xoxox

It's a long time since I've flown anywhere but I used to find that watching any film on planes ruined it because the attention just fades. I think it's the lack of decent oxygen to the brain. Coupled with the worry of sharing a toilet with 300 people. It could have been the in-flight cocktails I suppose - BOAC were quite generous.

The need to do this would be removed by airlines implementing a policy where all travelling children under the age of 16 are caged in the hold. Clearly this would be difficult for breastfeeding mothers but I'm sure they'd cope in the cage with an extra blanket.

I saw that film on a plane too. I didn't even notice the cuts, which must indicate that my filthy mind inserted the original words.

Yeah, stick in words like 'retugnant' - swearing is so dull and predictable these days that it needs a make-over with words that one doesn't quite understand.

One day, "retugnant twazmuppet" will be dubbed onto every inflight movie, mark my (censored) words.

You're all disgusting. Or dismantling. Or disgantling or something.

No, you weren't the last person to see it. That was me when I saw it on TNT the other night. I was annoyed by all the "freaking" and "mucking" but they did leave in "his hand was on her ASS!" So there must be at least 2 different levels of Bowdlerizing in this movie. I tear my hair over this shit. They make movies, TV shows, documentaries, etc that show people talking like real people (sometimes they ARE real people) and then the squeamish TV broadcasters have to clean it up for kids who will only watch the stuff if they are forced to!

I like it. I watched four , 2.5 hour movies on a Lufthanza back from Europe and now im retugnant! Haha. And now I'm traumatized...