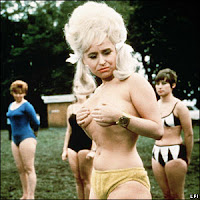 I've been reading The Fermata, by Nicholson Baker. I think I've read most of Baker's fiction over the years, but for some reason this had slid between the cracks; a phrase that seems fairly appropriate because Baker has two obsessions - sex and language - and investigates them in the minutest detail. "Between the cracks" would probably send him off on a twelve-page discursion about metaphor, cliché and some woman whose bum he accidentally groped, or thought about accidentally groping, in a Dairy Queen on the outskirts of Baltimore in 1979. Perhaps with footnotes.

The Fermata is the peculiar tale of Arno Strine, who discovers a talent for stopping time. (Those of you who've seen Heroes will know what I mean, and will also have further evidence as to how startlingly unoriginal - yet strangely enjoyable - this mash-up of The X Files and The Tomorrow People really is.) Strine uses his gift for two purposes: to get his work done in apparently superfast time (he's a temp typist); and to look at women's bodies.

This makes Strine sound like a pervert, and he is, but (by his own perception) a fundamentally decent, thoughtful pervert. He does actually like women, and would be mortified if anything he did upset them. He looks at their bodies; touches them; even masturbates in their presence; but then ensures that everything is returned to normal when time restarts, so that they never feel violated. Sometimes he seems to overstep his self-defined mark, mysteriously introducing sex toys into the lives of strangers, but his motive is always to bring happiness. Sick he may be, Patrick Bateman he ain't.

Baker adds to the moral confusion by having Strine write pornography, which is offered to us in the course of the narrative. We're distanced from it (it's fiction within a fiction) and Strine's motivation is supposedly honourable; he offers it to the women he sees, to excite them, to bring him joy, although he also masturbates while writing it. But it's definitely porn, not erotica (don't ask me what the difference is, it just is) and can be read as such. Should a reader appreciate Baker's gift for aping the tropes of Hustler and Penthouse? Or enjoy a discreet hand shandy of his/her own? (Incidentally, Mary Gaitskill in the back-cover blurb describes The Fermata as "Rabelaisian" which is one of those glorious critical references that's taken on a life of its own; people who've never read a comma of Rabelais know what he's like because of all the other writers who've been described as Rabelaisian; essentially, people who write about morally suspect things with such joy that you can't hold it against them. There's a similar phenomenon in rock journalism; everything the Stooges and Captain Beefheart ever recorded could be permanently wiped, and their reputations would be unaffected. But we're veering into Baudrillard territory there, and I did promise you a holiday from that.)

The crucial thread throughout the story is that Strine keeps his gift a secret, so none of his 'victims' (and I debated long and hard - ooh, there he goes again - about whether or not to use those quotation marks) know they've been spied on, undressed, fondled. Which, of course, raises all manner of questions about supposedly victimless crimes. If you never know that a man across the road is watching you undress through the curtains, is there a problem? If I don't know that the CIA is reading my e-mails, is there a problem? Because his gift is so bizarre, Strine can only discuss it with his acquaintances as a hypothesis, a parlour game, a piece of conversational fantasy; I know it's crazy, but what would you do if you could stop time? Even in its theoretical state, they tend to be repulsed by the potential invasion of privacy, so he keeps the secret from everyone but the reader until the end of the narrative. And when he does genuinely attempt to persuade someone that it's true, there are unexpected consequences.

The only thing that Baker doesn't address is the notion that maybe everybody has these powers. Since nobody knows when Strine stops time, how would Strine know when someone else stopped time and undressed him? And stepping back a little into the realm that we desperately call 'reality', Baker has constructed a fictional possibility. How would it be if everyone in the world knew that possibility wasn't a fiction; except for Baker? He's merrily playing with the creative possibilities of time, unaware that everyone else in the world is groping his bum.
Posted by Tim F at 8:08 am

Have you ever wondered who rearranged your CD collection? It took me a great deal of effort but was, strangely, unerotic.

The ending of the Fermata impressed me.

VS: You obviously overlooked the more interesting CDs.

PI: I just had an image of an episode of Newsnight Review getting seriously out of hand. Let's just say that Mark Lawson never ceases to amaze.

Oyebilly: It impressed you, but did you feel the urge to do anything about it?

I heard the chicken quote attributed to Woody Allen, OPD. Which makes it more disturbing still.