As I attempted for Manila and Tokyo, I offer five things about Cambodia (or, more specifically, Siem Reap and the temples of Angkor). 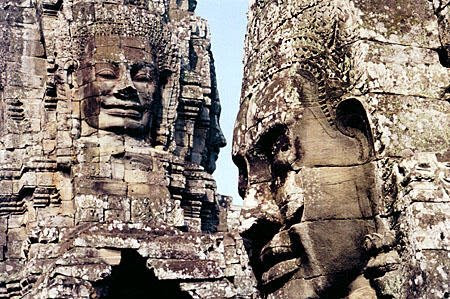 1. The Khmers invented Poohsticks. You put an identifying mark on a coconut and drop it down the well at the Bayon. About a week later, it should reappear in the great lake of Tonlé Sap; if you spot it, good fortune will be yours.

3. In the centre of Siem Reap, local people (mostly, but not exclusively, women) peddle second-hand books from carts. It's the usual mix of guidebooks, lurid volumes documenting the foul excesses of the Pol Pot regime, and the tome that now appears to be compulsory reading in the backpacky community: Mr Nice, by Howard Marks. Each cart has a large placard attached, giving a potted biography (in English, sometimes also in French) of the seller: name; age; number of children; disabilities and illnesses of any family members (polio, landmines, etc). It's difficult to know whether the details are accurate but, as spin doctors now tend to put it, the narrative is plausible. I think of the tart cards left in London phone boxes, and immediately feel guilty that I've made such a connection. But do you get my point? 5. Most of the temples have been reclaimed from the jungle, but at Ta Prohm the trees have been allowed to take over. As a result, the stones are constantly shifting position; the tree trunks, meanwhile, seem petrified, a little like stalagmites. The whole place seems to sum up two key elements of Buddhist philosophy: anicca, the notion of impermanence; and the belief that existence is a never-ending cycle of life and death. It's not often that a man-made structure accidentally comes to embody the very concepts that it was built to commemorate.
Posted by Tim F at 11:43 am

In my day "Off the Rails in Phnom Penh: Into the Dark Heart of Guns, Girls, and Ganja." was required reading. You can probably still find the odd soggy copy in the Tonle Sap.

It was worth reading this post for Alain Delon alone.
Never been to Cambodia but the temples look lovely.

The biographies of the book sellers make me think of the old hierarchy of beggars where they'd strap up legs or make fake boils to get more money/sympathy.

realdoc: He's so cool, isn't he? (Although apparently he's a complete shit.) Have you seen Le Samouraï?

llewtrah: I really liked O'Connor's early stuff, then I drifted. Maybe I ought to go back.

In my backpacking days (1999) It was Mr Nice by Howard Marks. He must be sitting on some nice royalties. Or perhaps it's still the same few copies going round and round again...

Looks good... I must go to Cambodia, I'd probably end up coming back with a library worth of books.

I love the cheeky monkeys. They have the right idea.

...not to mention apostrophe nightmare...

Oh for crying out loud, Murph. That Chalky business has really pushed you over the edge, hasn't it?