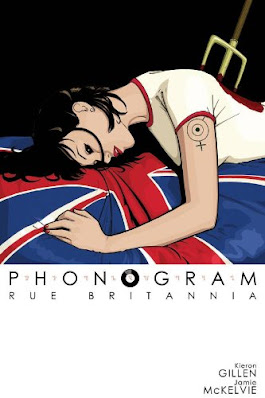 Late to the (Death Of A) Party as always, I read Phonogram: Rue Britannia, Kieron Gillen’s graphic novel that gives a dark fantasy to the glory days of Britpop, and a line leaps up that would have prompted a paragraph or several in my Radiohead book. First:

In those vacuum post-Britpop days that marked the end of the great British indie experiment (Birth: “Spiral Scratch EP”, the Buzzcocks, Death: “K”, Kula Shaker), there was space for all manner of leftist ideas to flourish.”

Gillen’s starting point is pretty much inarguable but in the book I suggested the patient survived the cod-psychedelia of K and staggered on until 1997/8, its terminal hangover depicted in the grooves of (take your pic), Blur by Blur, Ladies and Gentlemen... We Are Floating In Space by Spiritualized, Urban Hymns by The Verve, This Is Hardcore by Pulp (referenced on the cover of Phonogram) or, of course, OK Computer itself. And then Gillen reminds us:

The thing with Kenickie is that they, by the very nature of their existence, draw a line between all the enforced dichotomies modern pop. Seriousness is not the same as intelligence, no matter how many times virginal Radiohead fans reiterate it....