Following on from what I was saying a few days ago about the degree of sincerity and commitment with which some people buy into the pop-cultural tropes of the 1980s, Boris Johnson’s recent hymn to the Bell Curve is apparently another pronouncement from on high that may or may not be ironic. But it does express the political zeitgeist, following David Cameron’s recent admission at the Lord Mayor’s banquet that his government’s whole austerity package is an ideological crusade rather than a pragmatic necessity prompted by economic circumstances.

However, the clearest manifestation of this trend is not political but commercial. In importing the US phenomenon of Black Friday – without also adopting the preceding Thanksgiving festival that gives it a wispy veil of moral justification – British retailers are at the ones at the vanguard of a full-blooded, non-ironic 1980s revival, persuading people that their social value is determined by how much stuff they have. And of course Friday’s bout of acquisitive savagery is just a curtain-raiser for the big event. 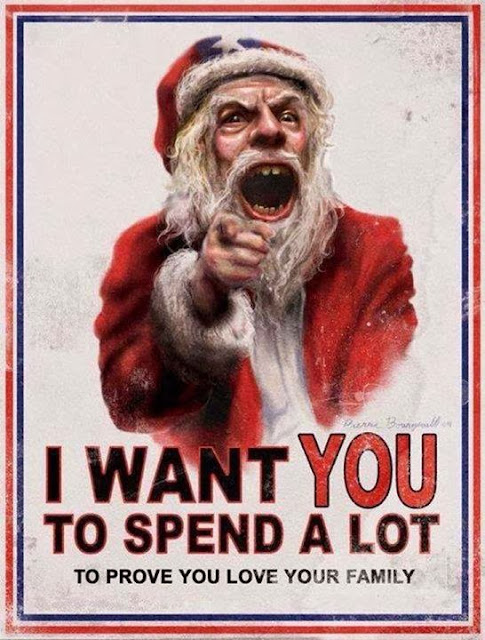 Well if that's the way you feel, I shall be returning the gift I bought for you. You can live the rest of your life without the electrical marmite whisk, see if I care.

What no-one seems to have pointed out in this whole sorry affair is that yoking inequality to IQ levels actually provides an argument for reducing current levels of inequality.

The truth, of course is that (a) the two IQ are unlikely to be so far apart; and (b) the owner will be earning massively more than 4 times the wage of a burger-flipper. So what we need is a closer link between IQ and income!

Such "cute" arguments aside, I think Johnson made a terrible mis-step with his comments. Such blather may have gone down well in the 80s after 30 years of quasi-socialist government (in the UK, at least). But in the middle of biting austerity caused by 30 years of rampant free-market excess they're unlikely to seem so brave and progressive. Indeed, I suspect many potential Tory voters will be disturbed by them as they seem to confirm our worst fears about the Government: it's a bunch of mega-rich toffs carving things up for them and their mega-rich mates.

Try selling that image to a middle-class family who are feeling the pinch and worried about their children's future.

I don't get the Cornflake metaphor. I tried it but all my flakes broke and settled on the bottom. Nothing rose to the top. Which is sort of metaphorically ironic.

You know what you can do with your marmite whisk, Vicus. In fact, you probably already have.

The Tories' disconnect from reality is quite bizarre, Philip. I particularly like how they trot Gove out as an example of a plucky pleb made good, as if he's a performing gibbon.

CC: It also ignores the hard core of Tory loyalists who don't like Coco Pops and want them to go back where they came from.