See his picture hanging on your wall 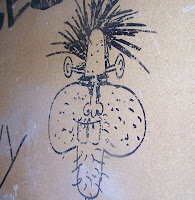 Graffiti drawn by the Sex Pistols when they lived in a rented flat in London in the 1970s has been described by archaeologist John Schofield – who in no way, shape or form is reaching for a headline-grabbing bit of hyperbole that may just raise his media profile enough so that his name is buzzing around the media ether when some desperate producer gets round to making a show called The Real Bonekickers – as “punk’s Lascaux”. In fact, much of it appears to be indebted to the wondrous work of Leo Baxendale – begetter of the Bash Street Kids – and as such ought to be preserved for the time when LB finally gets his own exhibition at Tate Modern. This really shouldn’t have been a surprise, as Johnny Rotten was so clearly the bastard offspring of Plug and Steerpike, but hey, now we have proof, and the images that provide such proof must be preserved.
But wait – what’s that I hear? Is it the sound of Telegraph readers harrumphing that this isn’t really art, and what the Pistols did wasn’t really music, and protecting these doodles isn’t what archaeology is about? And the occasional fabulously witty one-liner about unmade beds as well? Leaving aside the fact that the only piece of art a Telegraph reader would really appreciate is a portrait of Margaret Thatcher kicking a wind turbine to death, painted on tweed, it seems as if they’ve been lured into a trap as deliciously effective as the one that ensnared poor Bill Grundy. The Pistols’ credibility has taken something of a knock in recent years, what with one of them hawking butter, and another joining Simply Red (although at least they haven’t yet taken the John Lewis shilling). With their anguished, blimpish howls, the ruddy-faced disgusteds are just proving that the middle-aged punksters can still provoke. Mr McLaren would have approved.

PS: In The Guardian, Jonathan Jones sneers at Schofield’s appropriation of pop culture – then quotes George from Seinfeld.
Posted by Tim Footman at 7:17 am

On the other hand, Telegraph commenters are outraged by anything. It's their default position. I submit to you, in fact, that truly subversive art would be met with their approval.

The Pistols were only a manufactured Boy Band after all....

"Never Mind the Bollocks. What a load of Bollocks more like!".

Will the National Trust get involved? They're selling punk CDs, after all.

a portrait of Margaret Thatcher kicking a wind turbine to death, painted on tweed
Like it.
Also liked Ronnie Wood on that SImple Minds link.

Yes, Rog, I was impressed by the clever "use a word in one sentence, then use it in another sentence" motif. I bet he's the life and soul of the party.*

No, Geoff, the lesbian Muslims have infiltrated the National Trust as well.

Ronnie Wood's presence in your band is a sign that it's time to chuck it all in and study to be a dentist, BWT.


*This is Not A Good Thing