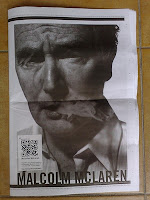 So BWT wanted a response... In 1976, when all that wondrous unpleasantness started happening, the notion that someone such as Malcolm McLaren might deserve an obituary in the Daily Telegraph would have seemed utterly preposterous. Now that it’s happened, I can’t decide whether it represents McLaren’s triumph, or his ultimate failure. Did he win, or was he just absorbed? In Situationist terms, do the plaudits that accompany his passing represent a détournement, or a recuperation? Did Jordan breed Jordan? Qui a tué Bambi?
Posted by Tim F at 7:56 am

Or you could take the view that punk would never have become popular without the aid of the media criticising and sensationalising it at every opportunity. Seldom has a movement had so little substance.

I thought there was a rather touching poetry to the BBC following their item on McLaren's death with one on Camilla Parker Bowles breaking her leg...

Complex fellow. One wonders if total nihilism can ever be more than just another fad.

"Did he win, or was he just absorbed?"

Many of us could ask the same question of ourselves. I suspect that in addition to the material temptations of success, it's hard to continue rebelling against an establishment when you've unwittingly become part of it.

Was McLaren ever a real rebel, or just one of the first Postmodern pranksters? Like the Monkees, the Sex Pistols were a manufactured boy band, but that doesn't diminish the fact that they were a breath of fresh air for the younger citizens of Sidcup, Chipping Sodbury and Crawley.

Is substance necessarily a good thing though, Vicus?

Yes, I spotted that, Bob. I suppose it's progress in a way that you can hear the Pistols on Radio 2, but the fact that they still play God Save The Queen (the other one) at closedown indicates that the overall war remains unwon.

MM was never a nihilist, Dick. Nihilism negates ego, and without ego, he would have been nothing.

Pranksterism is rebellious in its own way, Steerforth. It irritates those in power, because it's harder to engage with that outright opposition; the fear of being perceived as having no sense of humour is very great.

I was disappointed to get right to the bottom of the Telegraph obit without encountering an anecdote of World War Two derring do. Didn't he prank up those fake photos of Hitler dancing at the fall of France or wherever? And wasn't there some story involving camouflage and disguise? Evidently the Telegraph obituaries are not what they were.