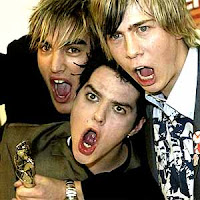 Today I’ve been doing some research into buzzwords and phrases of the Noughties, with an interesting off-piste into the world of protologisms: words that are specifically created and promoted in the hope that they will become widely adopted, and the person responsible will be able to carve out a small personal fiefdom in the Republic of Words. There's something a little tacky about the process; it's like manufacturing and promoting a faux indie band, and inventing a back story about how they met in the toilets at a My Bloody Valentine gig.

A real, effective, resonant neologism, I reckon, appears in the heat of the linguistic moment, in an environment that fosters and favours spontaneity and succinct wit — Twitter for example.

I can’t claim to have spawned a good new word; few of us can. But I can report that today, at 10:58 GMT, the magnificent Fat Roland came up with “net-loafing twazmuppet” And although I had no part in its creation, when Roland steps up to accept the award for the OED Interwebnet Phrase Of 2009, I’ll allow myself a titchy frisson of pride in the fact that I was the first person to whom it was applied.
Posted by Tim F at 2:37 pm

Oh, fuck twitter. Fuck it. Seriously, let's just ignore it and hope it goes away, like the financial crisis.

Just use an existing phrase and pun on it: i.e. global illage.

Or look into the mind of Douglas Coupland.

Expat: if the crisis goes away, the fact will be reported on Twitter first.

Billy: I'm never quite sure if Coupland makes up his coinages, or he just has an ear stapled to the Zeitgeist.

'Twazmuppet' is a glorious invention.

And I've been desperately trying to restrain my inner pedant from pointing out that it should be 'La' Chanson de Roland, but it seems to have escaped now.

Oh yes, so it has. Point taken.

*throws up during acceptance speech*

When I set up my faux indie band, you can be the girlie-faced one.