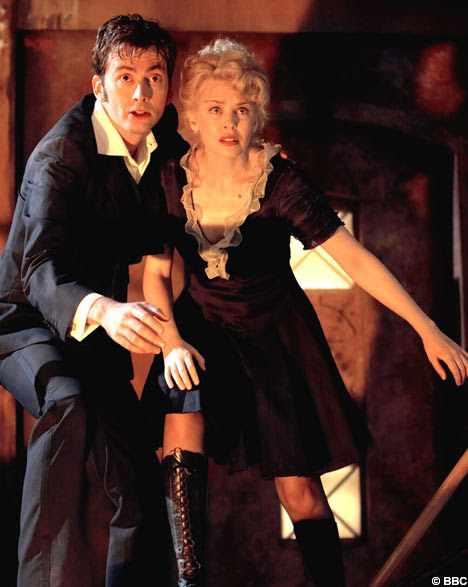 A few disconnected thoughts about the putative highlight of this year's sprout-coma TV. Most of these probably replicate musings on various Whoey talkboards but, hey, great spods think alike.

• New, quasi-banging-techno arrangement of theme music. I'd rather not, thanks.

• The pitch: The Robots of Death meets The Poseidon Adventure.

• Um, Starship Titanic, maybe? And wasn't one of the protocol numbers that the Doctor threw at the Hosts 42? Intertextual metafictional geekoid references ahoy! What next? Captain Jack masters the Vulcan death grip?

• Yeah, yeah, fanboys, ASTRID = TARDIS (anag). But it also = STAR ID, which is pretty much what happened to her. And, in a less literal sense, what happened to Kylie. And 'Astrid' may even be an oblique reference to a character in long-lost Troughton story The Enemy of the World? Or is that just showing off?

• Talking of Astrid, from some angles, Kylie looks like Janet Leigh. And from others, a young Gloria Hunniford.

• In any case, is it appropriate to call a 39-year-old woman a "pretty girl"? Even if you're a dying dwarf Cyborg?

• Ditto crowbarred-in gay lib reference. Yes, they can get married now. We get it.

• Bit of a waste of Geoffrey Palmer, I thought. But he was good while he lasted.

• But didn't Marjorie marry the Brigadier at the end of the last series? Oh hang on, sorry, that was the other putative Christmas TV highlight. Bit rubbish, wasn't it? But maybe it was always thus, and we just didn't know it at the time.

• Hasn't the disabled megalomaniac thing been done to death? We've had John Lumic, now this. Why can't they just bring back Davros and be done with it?

• The best (new series) Christmas episode yet, and the best thing RTD has done this year. Neither of which really constitutes effusive praise, but it was fun.

Email ThisBlogThis!Share to TwitterShare to FacebookShare to Pinterest
Labels: Dr Who, TV