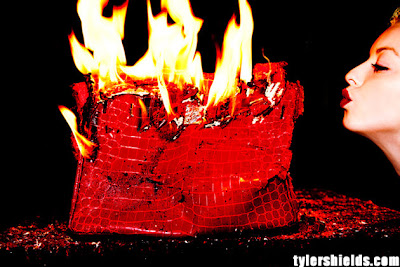 Francesca Eastwood, spawn of Clint, has prompted a minor brouhaha thanks to her involvement in an art stunt that involved a $100,000 Hermès bag being chainsawed and set on fire. It’s essentially a reality-show re-run of the KLF’s notorious Burn A Million Quid event, albeit on a smaller budget, and some of the aghast responses are pretty similar – Ms Eastwood should, we are informed, have put the money towards some more worthy cause. But is it really so much more heinous to destroy a bag worth $100,000 than to spend $100,000 on a bag in the first place? Or to sell it for that much? (Unless of course that’s what Eastwood and her conspirator/boyfriend were actually intending to say, in which case I’ve suddenly decided that it’s lame, studenty gesture politics of the most obvious kind.)

One more thought: how much direct involvement did the Hermès marketing department have in all this?

They weren't justified in using such an ancient prank