The needle and the damage done

Plenty of you will have seen the news snippet about the man who had a tattoo made of the passage in Leviticus that forbids homosexuality, oblivious to the fact that a few lines on there’s another passage condemning tattoos. 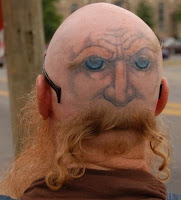 I would have thought that serious believers might be very much in favour of tattoos, because if there’s one thing I associate with permanent body art, it’s absolute certainty – fundamentalism, even. When someone has his predilection for Angelina Jolie or Gary Numan or Plymouth Argyle inked on his person, he’s not just saying that he likes them; he’s saying that he will like them until he dies. And there’s a paradox at work: most tattoos are done when the recipient is young, a time when tastes and desires are at their most passionate peak, but also deeply mercurial. The thing you love when you’re 17 may be the one you loathe five years later. And it’s only as the waste waist (sorry, Mum) thickens and the arteries harden that your If-I-Ever-Get-On-Desert-Island-Discs list stays the same from one month to the next. I mean, I know what I like and I like what I know, but do I really dare to ask for Evelyn Waugh on one scrawny, pasty bicep, TS Eliot on the other?
Posted by Tim F at 3:45 pm

You've heard about my "Freddie and the Dreamers" buttock then? I feel a right arse.

I’ve got Coldplay on my left one, Rog. Must buy some thermals.