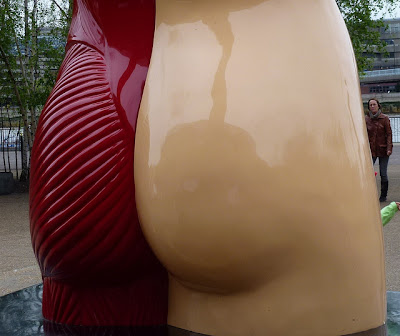 An interesting article in the Independent introduces a couple of artists who call themselves Damien Hirst. Inevitably, it’s not just a straightforward case of fakery or passing-off. These ersatz Hirsts claim to have aesthetic motives for their appropriation, one turning Hirst’s name into a Duchamp-style readymade, the other commenting the lack of originality in the echt artist’s work, and his own lack of direct involvement in many pieces that go to market under his identity.

Hirst and/or his representatives appear to be unhappy with the situation, which is odd; surely, neither of the provocateurs would have changed their names had young Damien not appeared on the scene, so he can legitimately claim both artists to be his own creations, which gives him the right to auction them off for some absurd sum. If they’re really lucky, he might dismember them first and put them in a fishtank.

PS: While we’re there, Jonathan Jones disembowels Hirst’s latest exhibition.
Posted by Tim F at 6:46 am