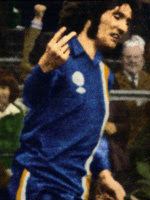 No, it’s not a Torchwood storyline. The Malaysian owners of Cardiff City FC want to change the club’s strip from blue to red, and replace the bluebird on the crest with a dragon. The argument is that the new image will be more helpful to marketing efforts in Asia, the importance of which to European football has escalated in recent years. They may have a point. Glancing at the car stickers on the streets of Kuala Lumpur and Bangkok would certainly suggest that Manchester United and Liverpool have a numerical advantage over those, such as Birmingham or Everton, which are owned or sponsored by Asian concerns, but persist in playing in blue. Even the resurgent Manchester City, once the plaything of Thailand’s former prime minister Thaksin Shinawatra, is an also-ran if the criterion for support is the trade in counterfeit shirts at the stalls on Silom Road. Red, especially for people from China and the Chinese diaspora, represents success, prosperity, victory and all that good stuff. Dragons are just the icing on the cake.

But how far should we follow this logic? If every football club wants to increase its fanbase in the Asian market, should they all don red shirts if they don’t wear them already? Indeed, if Manchester United is the brand leader, why doesn’t every club just call itself Manchester United and be done with it? It would make matches a bit confusing, but the marketing guys would be happy. And that’s what matters, isn’t it?

What a brilliant idea.

It got Bungay onto the Today programme...

He who pays the piper, calls the tune...

They could just re-brand blue as the new red?

I wish it was Chelsea changing to red.

Who's side are you on, Rosie?

What colours do Bungay wear, Rog?

True, Martin. You can't even have jumpers for goalposts if you can't afford jumpers.

Annie: What about purple?

But red's not the colour, Geoff. Nor is football the game, for that matter...