Savile, McAlpine, Petraeus and the truth about Leonard Cohen and me 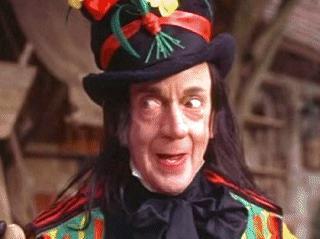 I wasn’t going to say something about the latest bizarre developments in... well, what I don’t even know what to call it for a start. It’s not Savilegate, because things are moving so fast that Jimmy Savile, who a few weeks ago had become some sort of conceptual synthesis of Myra Hindley, the Yorkshire Ripper, the Child Catcher from Chitty Chitty Bang Bang and Satan himself, has almost been forgotten; when you’re brought on as a stooge so that a not-fondly-remembered Doctor Who can say he didn’t like you much and oh, by the way, I’m going into the jungle with Nadine Dorries, then you know you’re on the margins. Well, you would know if you weren’t dead.

No, the story’s moved on, spewing out rumours and counter-rumours. Reputations of the living and dead have been left in shreds; not least that of the BBC, which was still apologising for not acting on allegations of sexual abuse when it was forced to apologise for acting on allegations of sexual abuse. Lord McAlpine is threatening legal action, even though he was never actually named by Newsnight; maybe he’s going to sue Philip Schofield’s piece of paper.

Two things, though. First, this is by no means a new story; I first became aware of the (unfounded, scurrilous, etc) allegations about McAlpine over 20 years ago. There’s been lots of grumbling about how various social media are to blame for rumour and innuendo taking hold, but in truth the likes of Twitter only amplify and accelerate the effect. The other point is that, allergic as I am to most conspiracy theories, I can’t help but wonder if somebody with an agenda (Anti-BBC? Anti-Twitter? Attempting to discredit accusations of abuse and those who make them? Any or all or more of those?) set some sort of journalistic honeytrap, an apparently solid story that was going to fall to pieces as soon as it saw the light of day, thus destroying the credibility of those involved in bringing it to public attention. Again, I’m not suggesting that MacAlpine was any part of this; he’s a MacGuffin. 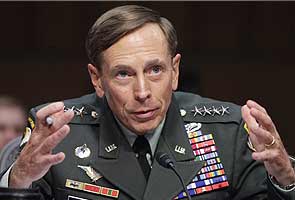 But I wasn’t going to talk about that, was I? In the States, they’ve got a sex scandal that seems to be – on the face of it at least – far more straightforward. David Petraeus, the boss of the CIA, has resigned because he’s been having an extra-marital affair. Now I’m not sure whether he’s broken some particular clause in his contract, or if he’s just falling on his sword (oo-er) because he feels he’s brought shame upon his office; if the latter, it seems terribly old-fashioned, but there you go. No, the weird thing is... well, the first weird thing, as a number of people have pointed out, is that the whole messy business seems to have been prefigured in a problem page in the New York Times back in July (see the second letter). But the really weird thing is that the woman with whom he was cavorting is also his biographer. Which raises all sorts of questions about objectivity and the awkward threesome formed by subject, writer and reader. I mean, would we read Boswell’s life of Dr Johnson differently if we found out that James and Sam were an item? What of Charles Moore’s only-when-she’s-dead tome about Margaret Thatcher? Paradoxically, I suspect that even as the credibility of Paula Broadwell’s book about Petraeus falls apart, sales will rocket.

So I suppose it makes sense for me to announce, in the light of disappointing sales for my 2009 biography of Leonard Cohen, that I have enjoyed regular bouts of rudeness with the septuagenarian crooner, although he kept his fedora on at all times. Hallelujah, indeed. 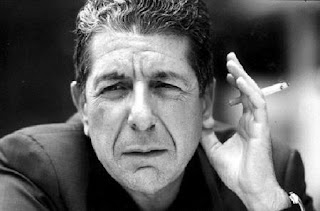 PS: Ooh, and the New York Post does well on the Petraeus front: 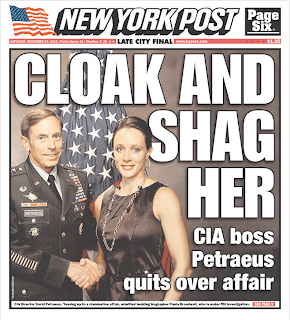 PPS: And a rather good blog post concerning the meme that says Morrissey knew all about Savile way back when...

PPPS: And yet more; Buzzfeed kicks Petraeus when he’s down, but does it well.
Posted by Tim F at 1:55 pm

That is a top front page.

When I lived in Scandinavia it became clear to me that Mr. Cohen is revered as a God there, Noway alone having kept his career alive during the dark years preceding I'm Your Man, so expect a fish-fixated fatwa.

And now, thanks to a little bird on the wire, everybody knows you were his lover lover lover

Good, isn't it? The Post still manages it; The Sun, which used to be very good, appears to have lost its mojo.

Well, BB, now seems to be the right time to talk about the indiscretions of the great and not-so-good.