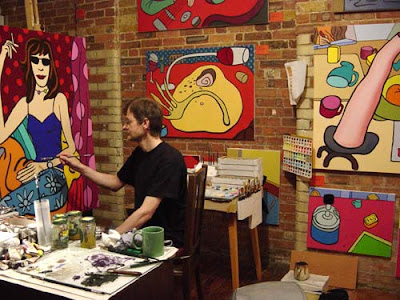 Charles Thomson (I’m assuming it’s really him, but since I’ve been following the US election on Twitter my ability to distinguish trolls and sock puppets and non-specific pranksters from the real deal has completely evaporated) has responded to a passing mention I made of him in a post about Damien Hirst’s new piece in Ilfracombe:

I not only existed, but was exhibiting art, performing poetry and staging events, when Damien Hirst was still at primary school. I can assure you that I was not in the slightest annoyed by Hirst at this time, as I had never heard of him.

...to which I responded that yes, I accept all that, but my reference was specifically to Stuckism, the movement for which he’s become the de facto spokesman and as far as I know that didn’t come into existence until the late 1990s, by which Hirst and his chums were pretty well embedded in the public consciousness. No YBAs/BritArt/New Conceptualism, no Stuckism. This doesn’t reflect on Thomson’s own talents as an artist; I rather like his fusions of Pop Art and Expressionism to be honest, certainly more than I care for most of Hirst’s vapid gestures. But the fact remains that when Thomson appears in mainstream media, it’s more likely to be as part of a story about Hirst’s art than Thomson’s. Stuckists have become defined by what they’re not rather than what they are or what they do; in effect, they’re critics rather than artists, the provisional wing of Jackdaw magazine. I’m not saying this is an ideal state of affairs, or fair, or a good thing in terms of art, but that’s how it is. In hindsight, art historians may well come to agree that the Saatchi/Serota generation was an enormous, bloated con trick and Thomson and his gang were right all along but – notwithstanding the recent critical kicking that Hirst’s had in some quarters – the not-so-Young-any-more British Artists are still on top right now.

Put it this way, Charles: most Express readers probably loathe Damien Hirst and his works and everything he and they stand for; until they’d read the article I was discussing, most Express readers had no opinion about you or your work, because they’d never heard of you. We’re in Oscar Wilde territory here; which would you prefer to be?
Posted by Tim F at 7:45 am

Goodness, memories - and the closest I ever became to being in a "movement". I was at Medway College of Design 79-80. Bill Lewis was there the year before me on the same course, Billy Childish was rampant in The Pop Rivets and everywhere (Peel session, too), and I have to say, very much the local hero (and I think a few years later ended up with my housemate who appears with him in a photo of an early incarnation of the Stuckists). The proto Medway Poets and Stuckist movement very much abounded around this time. I would have fitted in nicely, I didn't really go for concepts but the concept of not going for concepts was too much like hard work. Ho hum.

Yes, it is really me. At least, I think I am really myself. Anyway, back to the subject. I was responding to your mention "Charles Thomson of The Stuckists, who simply wouldn’t exist if Damien and his like weren’t around to annoy them", and I think it is perfectly legitimate to point out that not only would we exist, but that we were existing for some time prior to Damien and his like. What you are referring to is not existence but press coverage, which is an entirely different thing. In fact, we have had extensive press coverage relating to a variety of other subjects, including our Turner Prize demos, the Tate trustee purchase scandal, and our own shows. Furthermore, we had (as individuals or in our previous incarnation as The Medway Poets) both press and TV coverage years before Britart existed. As far as I am concerned, the opposition to Britart is the least important part of Stuckist activity (and the next least important is the press coverage). The important part is the work, which started long before Britart, is carrying on regardless and will continue to do so. What umbrella term that work falls under is also secondary. As proof of my identity, your blog is now linked on https://twitter.com/StuckismDotCom/status/272757652201807874, also http://www.stuckism.com and http://www.facebook.com/groups/2224155647/.

I think the state of affairs will change though. Hopefully art historians of the future won't just think stuckists are right, but also see Stuckism as: artist first, critic a distant second, if at all. This seems to be the example set by history, with other movements the establishment of their day didn't like. Contemporary collectors with more sense than money get in before the mainstream catches up. Stuckist paintings, viewed without current prejudice, are todays true successors to Modernism, something I think is obvious in Stuckisms strongest art and documented in their Stuckist and Remodernism manifestos. I think this will be of more interest to the future historian, thinking what to make of the art of today. More so than what comments Stuckists made in the press, about stories they probably won't even be interested in.

Many art movements have grown out of a reaction against other art work & artists, many have been ignored or minimized by the cognoscente of their day. Besides that our main criticism of Contemporary Conceptualism is that it's just another imitation of Pop/DaDa... ho hum.

Oh, and thanks for the photo! That is me painting in the Stuckism International gallery in Shoreditch about 10 years ago...

Some of us Stuckists feel uncomfortable by the continual focus on Hirst, but it is not all negative, Charles Thomson has written positive reviews of his paintings. I think you are right to mention it is dangerous though, the public seeing us as just Anti-conceptual art.

I became interested in Stuckism though the poetry of Bill Lewis, Billy Childish and Wolf Howard, I felt it was so fresh and raw, topical, and real. The paintings of Howard, Philip Absalom and Joe Machine affected me in the same way.

As owners of The Camden Falcon in the 1980s we put on bands with the painters Billy Childish and Ella Guru, So the foreground of Stuckist is the do-it-yourself Punk Movement of the 1970s (there is even a PHD on this, written by Mark D) growing into the Indie Music genre, then naturally into texts and paintings, with the same expressionist creative flux. All the artists feed off this flux, showing together and swapping or buying each other’s works. Something big will come out of this. As a founder member of the Feminist Art Movement 40 years ago, I know Stuckism is important.