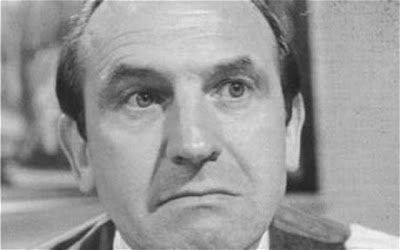 Here we go again. Someone else has made an allegation of sexual misconduct against a deceased showbusiness personality at the BBC. As I said about the Savile stuff, such claims need to be taken seriously, although the Leonard Rossiter file would appear to be rather slimmer.

But again, I’m more interested in the way the story’s being played, particularly by the BBC’s less placable foes. The Rossiter claims were first published in The Sun, but were quickly picked up (with attribution) by the Daily Mail. Now, normally when one paper runs an article that’s based on an exclusive by another story, they at least have the grace to hone the facts to their own in-house style, rather than simply copying and pasting the original. But there are a couple of stylistic quirks that struck me as interesting in the original version, and were then carried over in the Mail’s version of events. The first is the description of what it was that Rossiter was doing. In The Sun, Stephen Moyes says that he “performed a sex act”. Leon Watson’s story in the Mail uses exactly the same language.

The other oddity is about the context in which the assault is alleged to have taken place; during the production of Nigel Kneale’s play The Year of the Sex Olympics. Both Moyes and Watson use the same adjective to describe the work: “weird”. Now, I don’t know if either Moyes or Watson has seen The Year of the Sex Olympics. If they haven’t, I wonder on what basis they presume to assess its weirdness. They might like to know that it’s a dystopian fantasy about an elite that controls the moronic masses with a stream of crass media programming, ranging from non-stop pornography to a reality TV show that descends into murder. And I wonder, in the event that they ever get round to watching the show, whether these employees of Associated Newspapers and News International might experience a nervous frisson of recognition. If they don’t, they must be a bit weird.

PS: My friend Nick has given the story a bit of a fisking and, to say the least, the details don’t really stand up. In his words: “(a) There aren’t any rehearsal rooms at Television Centre; (b) What was an extra doing at rehearsals anyway? (c) The scenes being described were, in any case, shot at Ealing Film Studios.” But if they’d mentioned that, it would have rather diluted the BBC connection that was the only reason the story made it into The Sun.
Posted by Tim F at 9:35 am

We'll have none of that frisking here, thank you.

The whole sex act terminology is oddly coy.
As you can imagine - one of the main hobbies at BH these days is speculating on who'll be next. We missed Rossiter.

Sorry to have impinged on your tender sensibilities, Richard.

BWT: What I'm dreading is that some truly beloved archetype of 70s childhood (Savile was never beloved) will get caught up in it.

The dead can't sue, Gadjo. Especially not for sloppy, half-arsed, ignorant journalism, which is what this is.