Radiohead and the allergy to now 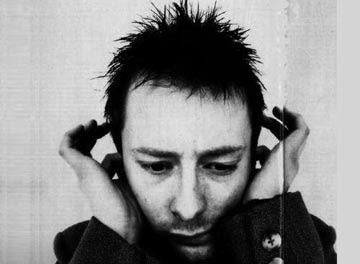 When I started reading about Velma Lyrae, a London woman who suffers from electromagnetic hypersensitivity syndrome, my immediate thought was, “She sounds like something out of a Radiohead song.” Her condition means that she suffers multiple debilitating symptoms if she comes into contact with computers, mobile phones, even hairdryers, and she spend most of her time inside a protective cage in her Blackheath flat. The Radiohead connection was because of Thom Yorke’s contention that one of the defining themes of the band’s 1997 albums OK Computer is “fridge buzz”, the inescapable background noise, actual or metaphorical, that pervades the modern world, and which the band covers in the song ‘Karma Police’. Damn, another missed opportunity; when I was writing my Radiohead book (hey, the Cohen and the Noughties ones got plugs in the past few days, I’m only spreading the love) I should have created a mythical, rejected song called ‘Velma In Her Cage’, featuring Jonny Greenwood playing an ondes martenot through a bank of vintage detuned radios and Thom curled in a ball, mumbling about how he can only communicate the evils of technology and capitalism by utilising the fruits of technology and capitalism, innit?

But hey, what’s this? Velma says:


I used to love going to festivals and experiencing live music, but because everyone has a mobile I can’t even go near a gig now. The last gig I went to was Radiohead. I knew I was getting worse and wouldn’t be able to go to any more so I wanted to make it a good one.

I can just picture her, heart pounding, joints aching, desperately hanging on Thom’s every baleful squawk despite the distraction of the tens of thousands of iPhones surrounding her, pulsing their evil ones and zeroes into her throbbing skull. And then I start to feel a little heartless as I wonder whether the whole thing might be some sort of conceptual joke to plug the next Radiohead album seeing as how an anagram of Velma Lyrae is


(And incidentally, that Infinite Jest blog of mine has shuddered back into some semblance of life, if anybody’s still pretending to be interested.)
Posted by Tim F at 8:14 am

Thank you for your hilarious blog. I'm very flattered you took the trouble to write about me. I have an intolerance to technology but as you can see in the picture I have a shielded laptop which keeps me in touch with the world. I try to get the word out about the harmful effects of pulsed microwave signals and remember "We're not scaremongering
This is really happening, happening" All the best Lame Raver

Good heavens, I thought 'Velma Lyrae' was too gorgeous a name not to be a made up one, but it seems that it is in fact attached to a real person! I'd never heard about this condition before. Coincidentally, I think my choice of a final concert would actually be Messiaen's Turangalila Symphony (featuring an ondes martenot).

Hello, Velma. Thanks for dropping by. If you think I'm hilarious, you should see some of the bonkers stuff they're saying about you on the David Icke site.

Jonny from Radiohead is a big Messiaen fan, Gadjo.

so funny that they were even contemplating I could be a Secret Special Service Agent. I remember after campaigning for non-GM food it was rumoured it was a Government ploy to get us all to eat organic (now that is funny). Hopefully we won't go into a full blown Shaun of the Dead just yet, but thanks to the Ickettes for the tip. I will keep my organite close at hand, although it won't save me from the Heisenberg effect. Just remember the Government line about Conspiracy Theorists - they are delusional. Have no delusions about that, unless you are delusional conspiracist having delusions that you're delusional. Velma http://www.doctors4justice.net/2010/11/effects-of-pulsed-microwave-radiation.html