Bodypainting: what’s it all about? (NSFW) 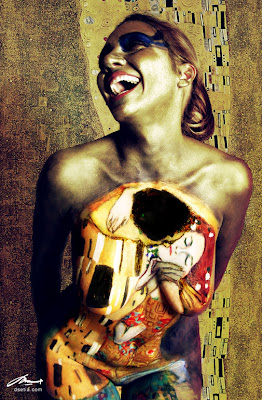 
We can have even more fun with Olaf Breuning. He’s also inspired by other artists when he paints on naked people, but his stuff is less about copying an existing, well known painting, more about identifying a theme. But some of the artists he chooses were known for their own paint/skin interfaces, such as Keith Haring:

In fact, one could argue that Klein’s art was in fact the marks left behind by his blue-painted models, rather than the models themselves; so what Breuning is creating is a simulacrum not of Klein’s art, nor even his canvas, but of his paintbrushes. In fact, since his pieces depend entirely on our knowledge of the original works and our response to them (if we like or dislike Haring or Klein, does that make us like or dislike Breuning’s takes on them more or less?) then what he is doing isn’t so much art or craft or porn – it’s more like criticism. With boobs.
Posted by Tim F at 10:12 am

I liked this and would definitely qualify it as art. With boobs.

The Materials maketh not the Art.

I love body painting as an art form...and Annie's link is excellent...of course in body painting you get the picture on the boobs, rather than in renaissance times when boobs were in the picture...

Well I don't think you can say its not art, in fact the innovative styles of body art that I've seen.in recent years led me to set up a blog dedicated to the art form ... I love body ART www.ilovebodyart.com

True, Michele. But then we get into notions of folk art, outsider art, fan art, etc...

Very true, Annie. And people are still ripping her stuff off today, which suggests she was doing something right.

Maybe not, Gadjo, but they affect our response to it.

True, NB. But why not both, boobs on boobs?

I'm afraid the main response in affects in me is a suspicion that I'm being offered the old shock factor yet again. I imagine it must be great to do though.

Looked at this at work and was not sacked. Perhaps the bosses have bigger problems at the moment.