Christy Wampole and the decade that perhaps never happened

Christy Wampole’s interesting article about ironic hipsterdom in the New York Times includes this paragraph, suggesting that in the last decade of the 20th century, sincerity ruled:

Born in 1977, at the tail end of Generation X, I came of age in the 1990s, a decade that, bracketed neatly by two architectural crumblings — of the Berlin Wall in 1989 and the Twin Towers in 2001 — now seems relatively irony-free. The grunge movement was serious in its aesthetics and its attitude, with a combative stance against authority, which the punk movement had also embraced. In my perhaps over-nostalgic memory, feminism reached an unprecedented peak, environmentalist concerns gained widespread attention, questions of race were more openly addressed: all of these stirrings contained within them the same electricity and euphoria touching generations that witness a centennial or millennial changeover. 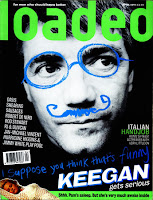 Now, I’m a little older than Ms Wampole, but I’m not yet quite so senile that I’ve forgotten that decade completely.  And my 1990s may have included a bit of grunge earnestness at the beginning (incidentally, Wampole seems to have overlooked Cobain’s wit, and that of the smarter punks), but it was also about the pop postmodernism of The Modern Review and the raised-eyebrow laddishness of Loaded (before it became just another vehicle for tits), the louche poses of loungecore, Jarvis Cocker vs Michael Jackson, Madonna when she was still funny, the Young British Artists ditto, Tarantino in his trash-referential pomp, Trainspotting, the hilarious implosion of John Major’s government, Monica Lewinsky, Lorena Bobbitt. Irony wasn’t just a desperate pose to fend off the reality of economic and environmental omnishambles by growing a moustache. It was just how it was. With great big air quotes around it.

So is this divergence between Wampole’s memories and mine a matter of age or gender or nationality? Or was everybody’s decade just entirely different? In my book about the Noughties, I suggested that it’s very difficult to find a generic image that sums up the 1990s, which distinguishes it from the preceding decades (mini-skirts and flowers; flared trousers and picket lines; power suits and Filofaxes). I even posited the idea that the decade never happened at all, existing merely as “a history-free buffer zone between the ideological polarities of the 1980s and the socio-religious anxieties of the Noughties.” So there. And lest I be accused of even more egregious touting of my wares than is normally the case, I’ll balance it by recommending John Robb’s excellent tome about the 90s, aptly subtitled What The F**k Was All That About?

I keep thinking of sulky old Ethan Hawke in Reality Bites drawling, "I'm bursting with fruit flavor." We were so pure then.

The 90s and how it was for me? I suspect I'm even older than you and so grew up during Glam Rock and then Punk. The 80s started OK, with more New Wave, but I tuned my radio irrevocably into Radio 4 when The Smiths broke up. The 90s did sound like a bit of a revival of genuineness, as the lady suggested, with Oasis and Co. bawling at us earnestly, but I wasn't really listening and by then I'd started Living Abroad and so the new experience for me was What the Foreigners Had Been Listening to All That Time. A bit of a cop out, I know, by highly recommended.

Catching the tail end of Glam rock and fully punk, I remember the 1990s with my first professional jobs, my first mortgage, my first redundancy (remember the housing crisis in the early 1990s?). So for me it was work hard, go to concerts (Garbage, the Levellers, Fun Loving Criminals), pub quizzes, rock climbing and watching spitting Image. I achieved yuppie-dom (a bit late). It was an intense, if financially anxious, time.

Isn't everyone's decade of sincerity the first ten years they start living as an adult? The stardust of adolescence still in their eyes mixed with heady release of being your own boss at last.

And then you notice reality.

I think everyone's marker decade is their teenage one, hence mine is the 70s. It had so much wrong with it but I remember it exceedingly fondly. The 90s, I turned 30 in 90, just after Thatcher was deposed, were odd. It was just about technology and consumerism, wasn't it, and how they supplanted engineering as the great social measure: before, we all had some kind of connection with engineering either working in it or relying on it somehow. Now it's whether we can afford technology. At the start of the 90s we had to run to our dictionaries to check what "paradigm" meant. At the end of the 90s our phones would tell us whether we'd spellt it correctly.

Well, I'm virtually the same age as Prof Wampole, and I remember a slightly less earnest decade than she does: Drop the Dead Donkey, American Psycho, Trainspotting...

A generic 'look' of the era might be Renton in Trainspotting (jeans, skinny t-shirt, converse) or Uma Thurman in Pulp Fiction (black trousers, white shirt) - neither of which exactly screams "1990s!!"

The nineties for me:

Divorcing from a 13 year marriage [good thing all around]

To earn $$ I waited tables in a comedy club, bartended in a biker pub, sold motorcycles [British and Italian], sang at blues jams, recovered from a motorcycle crash, went on to ride for six more years into the next millenium.

The nineties for me were painful, enlightening and full of new characters to explore.

A very interesting post. For me, the 90s was a joyful irony-fest, so I can only assume that Wampole was just too young to get it.

As far as pop postmodernism goes, the advent of punk was accompanied by a generally forgotten 1950s revival in the late 70s - Showaddywaddy, Happy Days and (of course) Grease - but it was crushed by Thatcher's electro-pop era. (If that argument sounds shaky, you should here my one about Funky Gibbon and the birth of rap in the UK)

Re: an earlier comment, my teen years straddled the 70s and 80s (mostly in the latter), but my musical and popular culture tastes were formed earlier, during the long evenings spent watching tv when I was too young to go out. I liked the 90s because it seemed to be a celebration of those childhood years - I could even come clean about liking Burt Bacharach!

For me, the enduring images of the 90s would include ladettes (maybe Louise Wenner), Mike Flowers, the film poster for Singles, the dial-up modem, The Word, Blur vs Oasis, Bill Clinton, Vic Reeves, Friends and the CD-Rom.

Well, no surprise there; it was different for all of us, which explains why there's no cheap and easy film-makers' cliché that sums up the decade. But by the same token, the 60s, 70s and 80s were different for everyone, yet we know what's meant when we see the pat images that represent them. How did the 90s - and subsequent decades - break free of that?