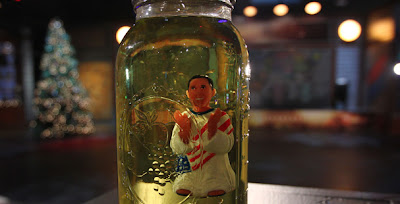 Polemicist-cum-weeping-buffoon Glenn Beck has put a model of President Obama in a jar of urine. Meanwhile, a 16-year-old has been arrested in Sussex for throwing ham at a mosque. One or both or neither of these is art. My head hurts. I blame Duchamp. Let's put him in some urine and throw him at the Pompidou Centre. Maybe we should just declare Year Zero and go back to cave paintings and start again. Although there would doubtless be some fur-clad* numpty in the cave, claiming that a child of five could do that.

Oh dear - another BBC fake facts story. Eek!
Meanwhile - for some unexplained reason - an old post of mine with hitherto unseen photos of a certain celeb is getting a lot of traffic today - it's here if you're interested http://wp.me/pDjed-1dR

Oh, crap on my childhood why don't you?