Damien Hirst vs the (Art) World 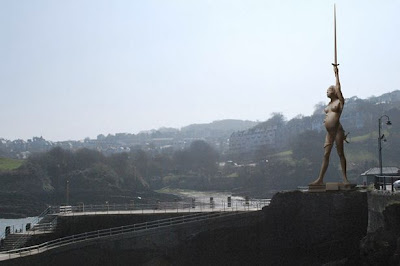 Well, maybe one shouldn’t expect cutting-edge coverage of contemporary art from the Express, but I reckon they’d be pretty good at picking up the vibe in Ilfracombe. The blameless Devon townlet is the location for Damien Hirst’s latest project, a 66-foot brass figure called Verity, and one Karen Farrington went to find out what they think of it. Opinion is mixed, as it usually is when it comes to big new statues. Paul the hotel porter can’t stand it and neither can Julie the Lib Dem councillor. But Peter from the yacht club and Dawn who owns the pub both think it’s fab. Caroline who runs the chippy doesn’t like it much herself, but thinks it’s a good thing if it attracts tourists.

But Karen’s not satisfied with that, oh no. She also wants to find out what yer actual experts think. And do you know what? They bloody well hate it and they bloody well hate Damien. But hold your bifurcated cows for a moment; which experts did she ask? Well, Julian Spalding, whose anguished Jeremiad about conceptualism I discussed a few months ago; his quote about Hirst being akin to the Mafia provides the article’s headline. And David Lee, who publishes The Jackdaw, the main purpose of which is to lay into conceptualists and their hangers-on. And of course Charles Thomson of The Stuckists, who simply wouldn’t exist if Damien and his like weren’t around to annoy them. The most staunch defenders of the YBAs, the likes of Jopling and Serota, Collings and Saatchi, don’t get a look in. So if you only had to the article to go on, you’d get the impression that Hirst has no support whatsoever in the poncey, up-its-own arse modern art world, whereas a lot of the good folk of Ilfracombe are prepared to give him the benefit of the doubt. Rather than being a sinister conceptualist Mafioso, Hirst comes across as an honest craftsman, cast out of fashionable London society but finding respect with the decent Express-readers of the provinces; he’s like LS Lowry, maybe, or Beryl Cook.

I’m not entirely sure that’s the impression the article was meant to convey. In fact, the piece is so out of sync with its headline, maybe it should be considered as an arch piece of conceptual art in its own right. Karen Farrington for the Turner, I reckon.
Posted by Tim F at 9:37 am

'Craftsman' is the word that leaps out at me there, and my trouble with recent modern art is that it's often just an idea and then a craftsman's job to realise that idea. I could have done that, with a little training, and I have no talent in the visual arts whatsoever. I've searched to see if Verity is 'cast from life' - which would indeed make it largely a craftsman's job - but haven't found any info on that. When 'artists' do this they struggle to make themselves worthy of the name and have to rely of pathetic shock value instead. The statue doesn't look particularly attractive to me, for what that's worth, but if the good folk of Ilfracombe like it then no harm done.

I not only existed, but was exhibiting art, performing poetry and staging events, when Damien Hirst was still at primary school. I can assure you that I was not in the slightest annoyed by Hirst at this time, as I had never heard of him.

Hello, Charles, thanks for dropping by. Yes, of course you existed well before Deadsheepboy popped up. My point is that the Stuckists as an entity – certainly as a word – only exist in response to conceptualists and YBAs such as Hirst.