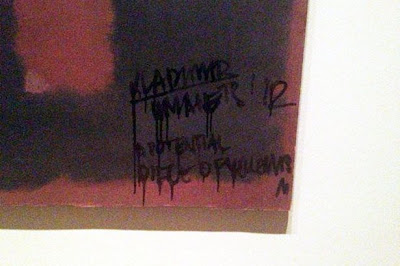 OK, I’m officially bored with people defacing works of art in the name of art (or anti-art or something along those lines). The joke’s just become too ingrown. Yeah, yeah, Vladimir Umanets, you got your name – and that of your precious Yellowism – in the papers. But you also knew that deep down that for most people your stunt would simply provide yet another excuse to trot out all those tiresome “a-child-of-five-could-do-that” whines about modern art; which LC, incidentally, has curated into a rather fetching conversation piece in its own right. Maybe he should ask Mr Umanets to scrawl all over his blog.

And in any case, there’s nothing new about it. I ran through the most notable examples of recent years a while ago; but some restoration work on frescoes in Valencia Cathedral has uncovered an even older example. Apparently a 17th-century workman had scratched a full set of gentlemen’s trouser equipment into an angel’s wing. Unfortunately he isn’t around to expand on his aesthetic justification.
Posted by Tim F at 6:58 am

"expand on his aesthetic justification." I would put that phrase in the National.