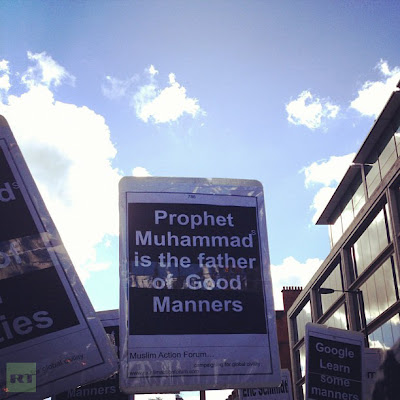 Thousands of Muslims descended on Google’s London headquarters last weekend to protest against the apparent “age of mockery” in which we find ourselves. This could easily turn into another anti-Islam diatribe (Jeesh, not only are they opposed to gay rights and bacon sandwiches, they haven’t got a bloody sense of humour either!) but these tiresome, beardy placard-wavers are far from the only ones. Indeed, some of the most unlikely people seem to have developed unusually thin skins recently.

Frankie Boyle, for example, scourge of political correctness and all that, is suing a newspaper because it said a horrid thing about him. And check out the guidelines on the comments thread of the Liberal Conspiracy site: “Abusive, sarcastic or silly comments may be deleted.” So silliness is a threat to liberal values now, is it? Some have argued that the problem is about excessive reliance by the police and others on section 5 of the Public Order act, under which a student was arrested for calling a police horse gay, among other travesties. I just think it’s a sign of the coming apocalypse, which probably puts me in the same boat as some of the bores and loons of varying religious and ideological persuasions who are complaining the loudest. Funny old world, innit? Oh sorry, I forgot, you don’t do humour, do you?


It should be fairly obvious, and I’ve gone over it umpteen times before, but I’ll spell it out. If an institution, whether it’s a religion or a political party or a football team or whatever is liable to fall apart at the first hint of piss-taking, then it’s probably a pretty decrepit institution in the first place and the mockers are only hastening an inevitable decline. And if said mockery offends you or hurts your feelings, well just sit yourself down while I list all the things that offend me on a regular basis until you die of abject boredom.

Are we really entering an age of mockery? I don’t know, but looking around, I bloody well hope so.
Posted by Tim F at 7:47 am

"Terrorism is not just people who kill human bodies, but who kill human feelings as well. The makers of this film have terrorised 1.6 billion people."

Isn't it just harder to avoid people you disagree with nowadays? Something that the obsessed, easily offended or blinkered are bound to find challenging. Of course, it's also easier to find people to reinforce your own points of view, and that's why I'm here - reading this has made me feel I'm not alone in getting a bit cross about my personal tolerance while others grab the right to be offended.

I've almost stopped watching the news completely but instead rely on a weekly digest of piss-taking from Hislop and HIGNFY to tell me all I need to know.

That seems pretty amazingly pathetic by the Daily Mirror, if my memory of Boyle's act serves me correctly. Talking of HIGNFY, doesn't tacking 'allegedly' onto the end of everything one says still work as a get-out clause?

Annie: There's not much point in mocking Muhammad, when you can have so much fun laughing at some of his followers.

Being offended or not being offended isn't really the issue, Chatterbox. It's what you choose to do in response to that offence; or what you demand of others.

In the glorious digitopia of the future, Rog, Hislop clones will appear in your living room to take the piss out of you UNTIL YOU BEG THEM TO STOP.

Sadly not Gadjo. Repeating an allegation that wasn't previously in the public domain can be libellous, even if you deny its veracity. "All his colleagues think Nick Clegg sells crack to orphans, but it's not true." That sort of thing.

May I just add "hear, hear" and "so's yer uncle". We've got the same bit of righteous indignation going on over here in the good ol' US of A. The whole thing makes for poor party conversation.