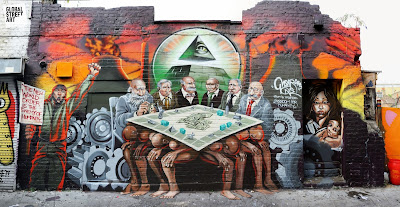 Not entirely sure what to make of this. An LA graffiti artist, Mear One, has painted a mural in Hanbury Street, east London, which, according to how you choose to interpret it is either an attack on global capitalism or a collision of several different bonkers conspiracy theory tropes with a distinct stench of anti-semitism. “Oh, but those big-nosed guys on the Monopoly board aren’t meant to be Jewish,” say the picture’s defenders. “They’re just, y'know, capitalists. With big noses.” The fact that the mural appeared in a predominantly Muslim area has escaped nobody’s attention.

Without wanting to descend to a pointless game of whataboutery, maybe those Danish cartoons were just pictures of some bloke. With a turban. Oh, and while we’re there, check out Amazon’s Dachau jigsaw; and, from a free speech perspective, William Saletan at Salon. My view? None of these things should be banned; but that doesn’t necessarily mean that it’s sensible to do them either.

Meanwhile, on a cheerier note: over here, I write an entire blog post about one footnote.

PS: Panic over. The mural’s going. But not before it becomes the victim of another moment of impromptu street art.
Posted by Tim F at 9:29 am

Are they meant to be Jewish? One of them is a dead ringer for Alf Garnett.

Hey Tim! Yep, pretty much a "Gnomes Of Zurich", "New World Order", "Illuminati" vibe going on there. With big noses. Hey, George Lucas included a HUGELY nosed leader of the Banking Clan in his Episode II: Attack Of The Clones. I was surprised that one slipped past the American censors, to be honest. Indigo

On the plus side - just cos you've been nominated, you don't have to accept it. Really.
It being this. Or these.
Two bloggie awards/chain letters?
Anyway details are here http://tinyurl.com/9yls7nc
The awards are the very highly prestigious Versatile Blogger Award and the One Lovely Blog Award.
You have now officially made it.
The past seven years have all been worthwhile.

They're clearly caricateurs of Jews - I don't see how anyone could be naive enough to think otherwise. It's particularly offensive, given the area's history.

Well Warren Mitchell is Jewish, Annie. (And wasn't AG meant to be in denial about his ancestry?)

Hadn't everyone given up on Star Wars by that point, Indigo?

Am at work on it as we speak, BWT.

Yes, it's the disingenuous reactions by the artist and others that I find so tiresome, Steerforth.