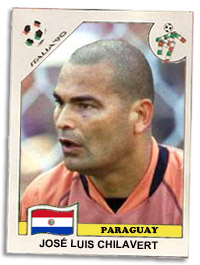 A couple of nuggets from a recent Economist article about Paraguay (a country that I’d previously known for its brilliantly bonkers goalkeeper José Luis Chilavert and not a lot else): during World War II, the government sympathised with the Axis powers to such an extent that the national police director named his son Adolfo Hirohito; and in the native language Guaraní, still spoken by 80% of the population, the word for tomorrow translates as “if the sun rises”. I love the bleakness of the “if”. Anyway, what delicious nuggets have you learned over the past few days?
Posted by Tim F at 12:47 pm

Email ThisBlogThis!Share to TwitterShare to FacebookShare to Pinterest
Labels: trivia

Istanbul used to be Constantinopal. I think that was a Turkey nugget.

In the eighteenth century Paraguay was ruled by Jesuits as a kind of enlightenment Utopia and in the nineteenth century, under a dictator named Lopez, it fought a war with Argentina, Brazil and Uruguay so bloody that there were ten times as many women as men at the war's end. Robert Bontine Cunninghame Graham [?spelling?] Scots-Spanish revolutionary, M.P., horseman and Pretender to the Scottish throne, wrote books about each, among others,

I went to Paraguay for lunch once - not from here, that would be silly. From visiting the Itaipu Dam - the dam on the Parana (tributary of the Amazon) which generates more electricity than any other dam in the world. As for delicious nuggets, they are so swiftly and eagerly ingested they can no longer be recalled but will doubtless surface should the occasion arise! Happy New Year (and what are we calling this decade?) Tim!

Thanks for that, Anon. Still, Chilavert, eh? Nutter or what?

I'm calling The Decade That Must Not Be Named, BB. Or the Voldemorties.

Kudos for not exterminating the local language, even if they were keen on Nazis.

Speaking of which, I learned that Otto Skorzeny, derring-do rescuer of Mussolini moved to Ireland after WW2, hobnobbed with the paraguay, sorry, paragon of virtue and future taoiseach Charlie Haughey, only to have his - Skorzeny's - presence later denied by the same Charlie.

So something in common with Paraguay - and I don't mean an ability to speak the nativish language.