What’s A Creative, exactly? I’ve heard the noun being kicked around in advertising circles (“This is Miles, he’s The Creative who’ll be working on the account.” “We’ll punt it over to The Creatives, see what they can do with it.”) where it seems to exist as an implied rebuke to everyone else in the organisation. How, after all, do you describe someone who isn’t A Creative? An Uncreative? A Destructive? 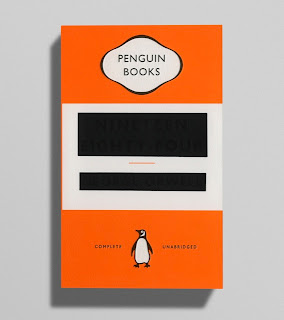 And while we’re on the subject, is it these Creatives who are expected to read the magazine called Creative Review? Or has it become something akin to The Economist; I wonder how many readers of that publication define themselves as economists. I only ask because a recent feature (in CR, not The Economist) dealt with David Pearson’s cover designs for Penguin’s new editions of George Orwell’s major works. The one that has attracted most attention is for 1984 Nineteen Eighty-Four, where the title and author’s name are obscured by black foil, and only visible in the right light because the characters are debossed. It’s a bold step, entirely in tune with the theme of Orwell’s novel, but it clearly carries with it certain commercial risks; what if the casual bookshop browser (if they still exist) can’t identify the book? And such concerns are presumably what prompted the following deliciously Gradgrindian comment, from one Graham:

I hate designers that get so keen to impress that they just do something completely impractical like block out all the type. Bottom line: Its a tossy response to a decent brief. The sort of idea a first year graphics student does before realising that they've made something pathetic instead of clever. We can all come up with witty rational for impractical design. The clever thing is when the man on the street can understand the concept and it connects in a genius way. If I was Penguin I'd want my money back. Bollocks to 'covered up'. Start again.

One wonders whether Graham is a Creative, albeit one of a distinctly practical bent. Or is he more likely a bitter Destructive, taking a furtive peek in the Creatives’ magazine and venting all his hatred and resentment on the cool kids down the corridor?
Posted by Tim F at 9:07 am

On the whole, I agree with Graham. The design is certainly clever, but at some stage utility has to be a consideration.

In any case, is the design really in keeping with the novel? Such obvious censorship was not the sort practised in the world of Big Brother; offending material was not blacked out, it was deleted and seamlessly replaced by an alternative version. That's the work that Smith does in the Ministry of Truth.

Finally, and sorry to be pedantic, but Orwell never wrote a novel called "1984". It's "Nineteen Eighty-Four".

Hard as it may be to work with "Creatives" - pity the poor dullards who work with "Talent". Though obviously we're relieved that some colleagues have some.

Enoch Soames, according to Beerbohm, wanted to publish a book of poems entitled " ". A few years ago the English poet Peter Reading wanted to follow his example. Gowever, the requirements of contemporary publishing and copyright meant it had to be called "[untitled]".

I think the blocked-out design thing is quite good, though only about 0.00001% as good an achievement as is the novel, so we should keep things in proportion.

Utility has to be a consideration, Zettel, but did he have to express himself in such a philistine way ("tossy", "the man in the street", etc)? And I see your point about the censorship element of the novel, but the fact remains that truth did still manage to assert itself, if only briefly; hope lies with the proles. As for the title thing, fair point, corrected, etc.

And BWT, let's not even consider the ghastliness that is "Creative Talent".

Good points, anon. I was never quite sure whether Peter Gabriel's early albums were untitled, or all called 'Peter Gabriel'.

Gadjo, I think the novel has filtered into modern culture to such an extent that it's gone beyond 'good' or 'bad'.

I agree with Wendy. Anyone can be creative in their own ways. Creativeness alone is not enough or nothing.