Manti Te’o and what went wrong with blogging 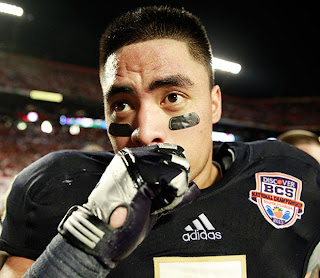 The bizarre tale of the college football star Manti Te’o and his non-existent, non-dead girlfriend clearly says something about modern society but I’m not entirely sure what. We’ve got the media’s demented desire to create narratives and backstories for celebrities, which means that it is no longer enough to be good at football or acting or economics; the modern sleb has to embody some sort of wider narrative as well. And of course there’s also the plausibility of the virtual world, that ensures solid relationships, love even, can develop without the mediation of physical presence (meatspace, as I still like to call it).

I only really began to think about this sort of thing when I started blogging, at which point I realised that relationships of a sort could be formed from ones and zeroes and words and ideas. In reality of course, this was nothing new; there have been epistolary relationships for hundreds of years, but they lacked the immediacy of comment boxes and messaging and e-mail. And then, when I discovered how easy it was to track the numbers of people coming to my blog, and where in the world they were based and which pages they liked and what time of day they were reading, it humanised the process.

Until of course I realised that great many of these apparent eyeballs were in fact spammers and bots and various long-leggedy digital beasties; and that many blogs, begun amid the wide-eyed enthusiasm of the mid-Noughties, had also been taken over by sellers of Viagra and Ugg boots. What once felt like human dialectic, action and reaction and interaction, had become a matter of machines talking to machines, like a Turing test run amok. Which brings things back to Manti Te’o; we know that his girlfriend doesn’t/didn’t exist, but how do we know that Manti himself isn’t entirely a fabrication of the media; two unrealities, cuddling up in a fake but beautiful romance?
Posted by Tim F at 7:32 am

I enjoyed what you said about our need to create a back story for our celebrities. I hadn't thought of it that way, but you're right: we want them to be talented and powerful and beautiful... and if there's any way we can get them to be honest and struggling to overcome some thing or another, all the better.