Klaus Kinski and the judgement of history 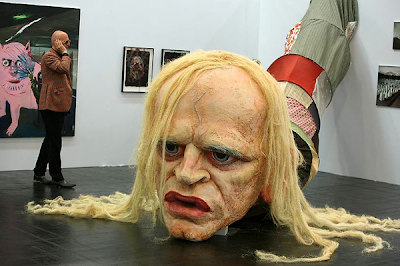 It seems that another eccentric cultural icon with bizarrely blond hair has been posthumously accused of child abuse; this time it’s the late actor and all-round crazyman Klaus Kinski, whose daughter Pola claims that he raped her throughout her childhood and adolescence. Of course, such accusations should be taken seriously and investigated, just as the Savile claims are being investigated, even if the alleged perpetrator can’t be tried. The complication here – again, as with Savile – is that whether we mean to or not, we will also be trying Kinski’s public persona, and also his work. The first doesn’t present too many difficulties; he was widely known to be a very strange man, and not really in a very pleasant way; he never ran a marathon for charity, as far as I know. Adding paedophilia to his many sins wouldn’t be such a big stretch of the imagination. But what do we do about his movies? Do we treat him like the sculptor Eric Gill? The revelations about his multiple sexual misdemenours prompted calls for his works to be removed from public view, but to no avail. Or will Kinski become another Savile or Gary Glitter, pretty much airbrushed, Trotsky-style, from pop history? And why the distinction anyway? Was it because Gill produced proper, worthwhile art and Savile and Glitter were merely vulgar, tawdry showmen? On that basis, will we still be allowed to watch the Herzog Nosferatu, which was A Great Film, but not Jess Franco’s Count Dracula (in which Kinski played Renfield) because it was just a bit of Euroschlock?

PS: In Der Spiegel, Arno Frank writes that – in common with Savile – Kinski hid his proclivities in plain view; but also concedes that his evil was a key component of what made him so compelling a performer.
Posted by Tim F at 7:07 am

An ongoing consideration with Roman Polanski that is especially troubling me during the current season - I've more or less decided that I can justify Chinatown but nothing else, which kind of fits in with what you are saying here.

Some cases are easier - some would argue that given my background I should not listen to Wagner but I justify it in the knowledge that he would almost certainly (were he alive) find the idea that his work was being enjoyed by modern day Nibelungen so annoying and offensive that it makes it entirely worthwhile.

He was a fuckig cut but he didn't act like he was a nice guy so is it so surprising ? His movies were ok and it is possible to separate the work from the prick that did it.
Henry

Yes, I completely forgot Polanski, GSE. I think he's done a few other worthwhile things (do like The Tenant) but he's certainly given an easier ride than a producer of formulaic dross would get.

Thanks Henry. I'm sure Kinski would have expressed it in similar terms.