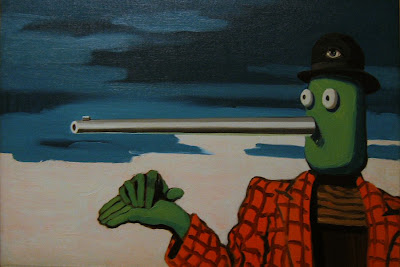 Sorry, but I’m still on about words.

Small Boo has given me a rather splendid book about my favourite painter, René Magritte. Not only does it include all the images that have become stale through repetition on postcards and tea-towels, it also devotes a lot of space to some of the less familiar pieces, including paintings from the 1940s, when Magritte experimented with a looser style, some of them strongly influenced by Renoir and Matisse; as well as photographs and bronzes.

Throughout the shifts in style and medium, however, Magritte’s big idea persists: superficially ordinary, even banal subject matter, rendered bizarre and even threatening by juxtaposition and tweaking. A man with an apple for a face; boots becoming feet; a flaming euphonium; a pipe that isn’t.

The only downside is that the accompanying text seems to follow a similar trajectory. It’s comprehensible as English, but not comfortably so; the reader just about understands what’s meant, but every few lines, there’s an eye in your slice of ham. This may be the fault of author Jacques Meuris, but I’m inclined to point the finger at translator Michael Scuffil (the sort of blame game I discussed earlier). Here are a few choice morsels:

“The brush technique with its contrasts and glissandi calls forth immaterial, impalpable impressions.”

“It is moreover an example of his attempts on the moral plane to harmonize the meaning he gave to his work as a painter with that of his life.”

“Magritte was never a friend of symbols in painting, though in poetry perhaps.”

“The total rejection of the gratuitous was one of the constant features of Magritte’s attitude.”

I'd be inclined in this instance to put the author in the dock. Time and time again we're called upon to translate from French into English and often it just won't go, not without very considerable periphrasis, because the conceptual bases of the two languages, particularly when writing about abstractions, are irreconcilable. The quoted extracts are certainly sloppy (Scuffil is happier with German, maybe understandably) but I suspect the original French posed an insuperable challenge.

I love this sentence, though. You don't see enough oeuvres toppling over into their destinies these days. Also love Magritte.

Oh, and what should we use your leg for?

“All that was left for this oeuvre was to topple over into its destiny in 1967.”

Agreed. Toppling into destinies is excellent. Following is just trite.

Christopher: It just sounds to me as if everything was translated literally, maybe even with one of those online wotnots - more periphrasis would have been a good move.

Annie: It's a quote from The Wrestler. Glad you're a René fan. He's actually a very limited painter, in technical terms at least, but what he does, he does very well. Bit like Burt Reynolds, say.

It's not just the toppling, Art, it's the toppling *over* that I like. Makes it somehow more amusing.

It reads exactly like the dyslexis that is one of the signs that my medication needs to be adjusted.

Heavy Metal Magazine back in the 70s used to be rife with that kind of too-literal translation. It added another level of weird to an already surreal read, which was all to the good as far as i was concerned.

...and now if you'll pardon me I have to go prop up my oeurvre.

I agree that Magritte is rather limited, but the stuff he is limited to is very good. Also he's Belgian, and you don't have enough Belgians who are well known.

Billy: I disagree. The "name five famous Belgians" meme has become so well established that everyone knows Magritte, Brel, JCVD, Audrey Hepburn etc eat/ate their chips with mayonnaise. It's time to give the Swiss a chance.

The poor translator writes: "Chinese whispers". I was commissioned to translate the German translation into English. I never even saw Meuris's original text. I no longer accept this sort of commission.