Rolf Harris: can we see what it was yet? 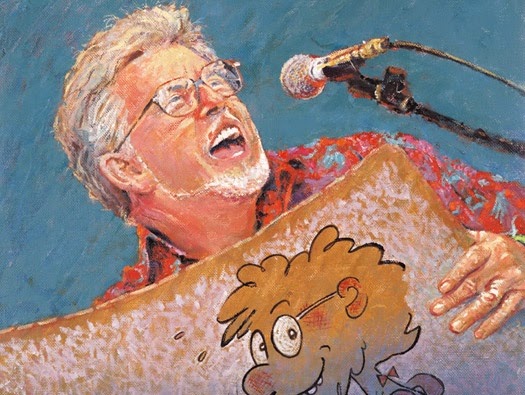 So, following the precedent established by Gary Glitter, Jimmy Savile and others, the disgraced Rolf Harris is being written out of our cultural history, never more to pop up on light-hearted, list-based, celeb-sprinkled retrospectives of specific decades or genres. Fair enough: he’s a bad man and footage of his wobbleboard singalongs, or even of him comforting the owners of deceased parakeets, is now impossible to watch without thinking of his misdeeds.

Harris, of course, is a more complicated case, because he was also a painter of some fame — yet it appears that he’s not being cut the same level of slack extended to Gill, nor yet to Paul Gauguin, who frolicked with Tahitian nubiles and probably gave them syphilis. The Harris portrait of the Queen seems to have disappeared from sight and owners of some of his other works are desperate to be rid of them. I was especially touched by the anguish of one Cathy Sims, who used to sing to her picture of Bonnie Tyler but now wants to burn it.

Maybe the difference is that Harris’s paintings can’t be detached from his now-tainted public persona; his TV appearances added to the fame and value of his art and now that we can’t watch them without retching, we can’t look at his paintings either. Essentially, without Rolf the performer, Rolf the painter wouldn’t have got a look in. And maybe one day, once the collective memories of his misdeeds are less raw, we’ll be able to look at those paintings coolly objectively, unaffected by knowledge of the artist either as avuncular entertainer or cynical predator. And with luck we’ll be able to see that, in purely aesthetic terms, they’re pretty bloody awful.

PS: The demands for retrospective airbrushing begin...
Posted by Tim F at 7:13 am

Well, exactly. It's those Stuart Hall match reports I miss having the right to express retrospective enjoyment over.

Worst thing is - we've all got to worship and adore the entirely innocent flame haired Rebekkaka because the binary justice system doesn't have a "maybe" setting.

I agree with much of what you say Tim. Not many of us - Jewish or not - would have wanted to break bread with vociferous anti-semite T.S. Eliot, but his poetry is probably the most profound in the modern era. We should be less picky about our artists' table manners when they do the living for us that we would not choose to do.

That said, I do think the revulsion and the revisionism are serving a very imporatnt cultural purpose. We come from a bad place - the 1970s - and I think that the revision of that decade from Maconie-esque 'ooh, wasn't it funny that she said the word pussy' to what seems to be the beginnings of a reappraisal of where some of the more progressive strands - most notably feminism - have actually pitched up is very overdue.

May be a coincidence, but why else are lads' mags dispensing with the nudes etc.? A lot that was harmful - no, dang it, I'm going to make a value judgement - a lot that was bad, gets prettied up in the nostalgia bloom. We perhaps chose to ignore the links between the light and dark strains of misogyny and male supremacy and the legacy that today's youngsters are beginning to show signs of wanting to redress.

You're spot on about performance being inextricably linked to personality. Of course, what makes old clips of Harris, Savile and Gadd so hard to take is that the very act of performing gave them access to their prey. That they had an audience made it possible… and now it's too late to look away.

Roberta: the question is whether we can best deal with the wrongs of the past by acknowledging and confronting them or by pretending they never happened. My instinct is the former. See also the practice of revising old texts to remove words that are now seen as racially offensive.

"Way back when I was completely outside the media loop, I heard rumours about Jimmy Savile; oddly, all of them revolved around his apparent fondness for acts of necrophilia, which he supposedly indulged under the cover of his voluntary work as a hospital porter; I don’t recall anything about child abuse."

The necrophilia rumour must have started by someone, somewhere having witnessed something
- and choosing to pass it on as gossip rather than taking any positive steps in response to it.