So, Jeremy, which Tory are you today? 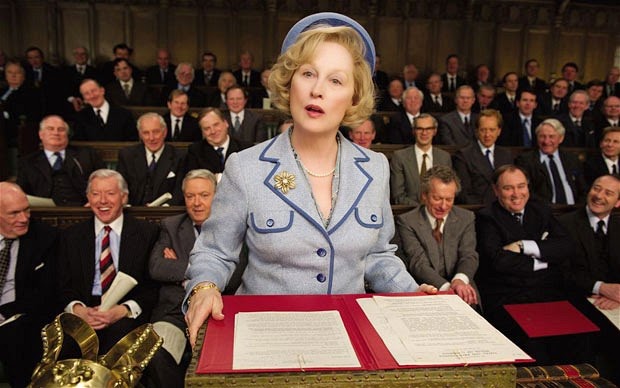 I know it’s late in the day but I only watched The Iron Lady for the first time last night. The delay was down to a number of factors, not least that the film was written by a university contemporary of mine. (She was perfectly nice as far as I recall, but why let that get in the way of a bout of childish, self-pitying jealousy?) It was also one of those films that I sort of assumed I’d already actually seen, partly because of the way the various Thatcher-related productions released over the past decade or so seem to blend into each other. One reason for this is so many actors seem to pop up in more than one film, albeit in different roles. The honours in this regard would seem to go to Michael Cochrane, whose small role in The Iron Lady follows his efforts as Alan Clark in Margaret, Waldron Smithers in Margaret Thatcher: The Long Walk to Finchley and Nicholas Ridley in The Falklands Play. Nicholas Jones takes on Admiral Lewin in the Iron Lady, Tim Renton in Margaret and Peter Morrison in The Alan Clark Diaries); while Jeremy Child is Francis Pym in The Falklands Play, with minor roles in The Iron Lady and The Long Walk; John Sessions plays Edward Heath in The Iron Lady and Geoffrey Howe in Margaret; Roger Allam is the image consultant Gordon Reece in The Iron Lady and John Wakeham in Margaret; and Jeremy Clyde, Julian Firth, James Fox, Robert Hardy, Philip Jackson, Rupert Vansittart and Julian Wadham each crops up in at least two of the five productions. Thatcherism seems to have spawned its own Carry On gang.

Two thoughts on all these Jeremies and Julians. First, that it reminds me of a student production of Ubu Roi that I once saw, when in an effort to give all the actors a chance to show off their versatility, everyone had a crack at playing Ubu himself during the show, with the other roles also being swapped around to accommodate the effort. This is of course an imperfect analogy as the role of the former PM herself is always played by a different performer but the notion of the Blessed Margaret as a bulbous, self-obsessed, foul-mouthed psychopath has a certain piquancy.

The other is that despite all the glory, laud and honour bestowed upon Thatcher for supposedly changing the shape of British society, there do seem to be certain jobs reserved for a very small pool of middle-class, middle-aged white men who look plausible in grey suits; and that doesn’t just apply to politics.
Posted by Tim F at 12:55 pm

My first name is Jeremy. Why did my otherwise fab parents do this to me? Not a good name on a council estate.