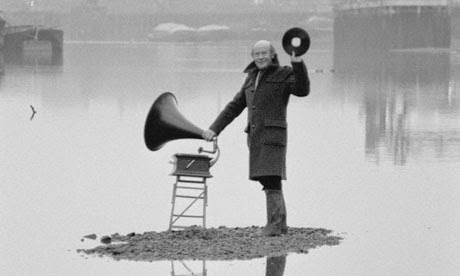 The format of the radio programme Desert Island Discs has remained pretty much unchanged since it started over 70 years ago. The guest is asked to imagine that s/he will be stranded for an indeterminate period on a desert island and is allowed to take eight records, a book and a luxury item of no practical use. The only real element to have changed is that for most of its duration, it was assumed that the Bible and the complete works of Shakespeare would already be there; now one can have an alternative religious text in place of the former.

That’s about it, though. Castaways are no longer told they would be provided with an unlimited supply of needles for the island’s (presumably wind-up) gramophone but the arrival of LPs and then CDs has barely been acknowledged: the selections are usually individual songs rather than whole albums, so one wonders how someone might physically be able to take, say, ‘She’s Leaving Home’ from Sgt Pepper’s Lonely Heart’s Club Band without bringing the rest of the record. Oddly, this didn’t apply to classical works, so a guest would be able to select Beethoven’s Ninth, not just the hummable bit at the end.

The whole idea now seems even more anachronistic as the very concept of records — as the show’s originator, Roy Plomley might have thought of them — is in danger. Nick Hornby subtly pointed out the daftness of the situation as long ago as 2003, when, in addition to his eight discs, he picked an iPod as his luxury, and Sue Lawley, the presenter at the time, had to explain to listeners what it was. I don’t know whether guests are discouraged from such smartarsery these days, but I can’t remember anyone pulling a similar stunt since.

Until today, that is, when the web scientist Wendy Hall made her choice of book: Wikipedia, loaded onto a (wi-fi disabled, for the sake of propriety) Kindle. In a desperate attempt to maintain the privileged sanctity of the codex, Kirsty Young said that such a thing could only be allowed if it were printed on paper. Hall sensibly pointed out that this would make negotiating the links between articles a chore, but ultimately accepted that DID is bigger than any one castaway. I suspect she’s raised a few uncomfortable questions in the production office, though. Sure, the format is based on a fantasy; but there’s a generation coming up for whom the rules and restrictions of the programme are genuinely unimaginable.
Posted by Tim F at 3:06 pm

My son-in-law and I had a similar conversation a while ago. I missed Wendy, but will track her down. She's currently Dean of the Faculty of Physical Science and Engineering at the site of my timely escape, University of Southampton.

Interesting view into changing values and expectations. Reminds me of a tweet I saw the other day: "Last night my mate asked to use a USB port to charge his cigarette, but I was using it to charge my book. The future is stupid."