Wikifibs, Jarvis cakes and the memorial scarecrows of Nagoro

Way back when blogging was still A Thing, I’d actually worry if I hadn’t posted in the past two or three days. Now it can slide to a week or more before I get an itch of guilt. Of course, in those olden days, if I couldn’t think of anything compelling enough to use as raw material I’d just put up a few links to stuff that had recently interested or amused me and then maybe top it off with an equally random YouTube clip and I’d feel a bit better.

Well, I haven’t posted anything for nearly a week and I feel not so much worry as a vague sense that if I don’t make use of this thing once in a while that it will atrophy and die like an inactive limb, or I’ll forget the password, whichever is the worse. So, without indulging in any further self-analysis, I offer up: an excoriating review of a project with which I was involved several lifetimes ago, which generously describes my own modest contribution as “entertainingly prissy”; musing on what it feels like to be the original for a fictional character (and I point once again to my own form in this area); the tale of a Wikipedia fib that took on a life of its own; Jarvis Cocker in cake form; a debate on whether the highbrow/lowbrow divide has any particular meaning any more; which leads in a roundabout way to the fact that the new Murakami novel will hit the shelves—digital or otherwise—in a matter of days; and from there, it seems to be a short hop to the Japanese woman who found a new way to replace absent friends. 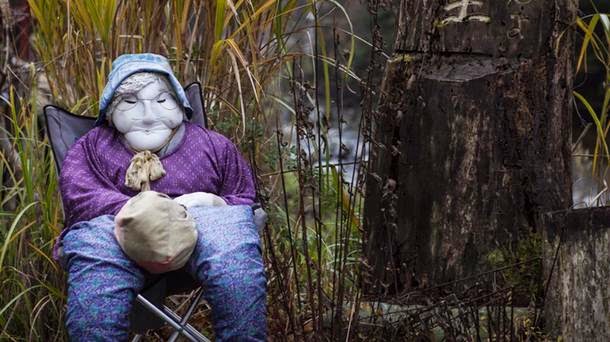 I recently discovered that blogging is still a Thing on Wordpress.com. They are rampant there in the same way way that Blogspot Bloggers used to be; it's like a secret underworld. I even get that old buzz when I post there.
Sx

P.S I like the dolls. They are nicer than memorial benches.
Sx

I always worry about forgetting my password, since I have the memory of a goldfish, but I refuse to give my phone number out for retrieval purposes. That's what email is for.

Yes, have been tempted to pitch a tent over there, Scarlet. Feeling a bit Myspace round these parts.

My password arrangements are becoming ever more labyrinthine, Chicken and they're all in my head. Feels like I'm one serious drinking session away from locking myself out of all social media forever.