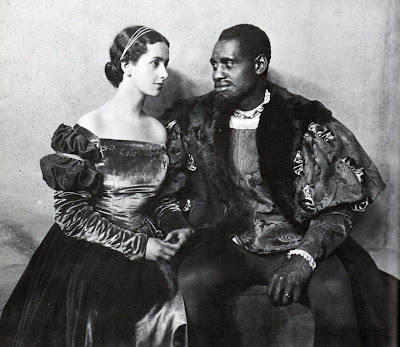 I’ve blathered on before (here and here) about all the complex issues that the casting of Othello throws up in the modern world, and to what extent the role should be ring-fenced, and for whom? And now I find a further consideration of the whole colourblind issue which asks whether Ben Kingsley (who is half-Indian) was black enough, but doesn’t really tackle the question of whether Adrian Lester’s black Hamlet makes Patrick Stewart’s white Othello OK. And there’s a contemporary response to the first black Othello of the 20th century, Paul Robeson in 1930: “There is no more reason to choose a negro to play Othello than to requisition a fat man to play Falstaff.”

Which sounds daft, until you think — when was the last time you saw a thin man play Falstaff? And that brings to mind James Corden’s recent bleat about how he’s never cast as the romantic lead. I wonder, what’s the next step  — bodyblind casting?
Posted by Tim F at 10:14 am

At one time, many opera singers were quite portly and that didn't stop them being cast as consumptive heroines. I'd be very happy to see classic roles, at least, being cast colourblind, bodyblind and genderblind.