About Notre Dame and Nick Cave 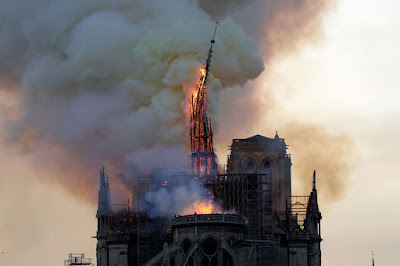 Everything that needs to be said about Notre Dame, and plenty that needn’t, has been said. But it does tie in, however loosely, with what I wrote here last week about whether the morals of the artist should have impact on our response to that art; more specifically, the addendum from Nick Cave, who argued that “art must be wrestled from the hands of the pious”.

Except that pious people do make good art, always have. Think of Michelangelo, Bach, Evelyn Waugh. Although the flames ripping through the cathedral prompted grief and despair in the hearts of many non-believers, Notre Dame is almost wholly the work of the pious. Pious people who were doubtless, by the standards of our own time, fervent sexists and homophobes; pious people who were vociferous in their support for Crusades against the infidels and Inquisitions against the heretics; pious people who killed women accused of witchcraft; pious people who sought to silence anyone daring to suggest that the Earth revolves around the Sun, or that life on said Earth took a bit more than seven days to pull together. Ultimately, the combined sins of the people who funded and designed and built Notre Dame easily dwarf anything of which Michael Jackson or Woody Allen might be accused.

And yet, quite rightly, we all cried when the spire fell.

PS: And sticking with piety, a really good piece by Adiyta Chakrabortty about the billionaires noisily chipping in to rebuild the cathedral:


Not least among this litany of ironies is that it takes a Catholic cathedral to remind us that we have barely advanced an inch from the medieval buying of indulgences, when the rich could amass their fortunes in as filthy a fashion as they liked – and then donate to the Church to launder their reputations and ensure their salvation.