Peaky Blinders: my problem with the music 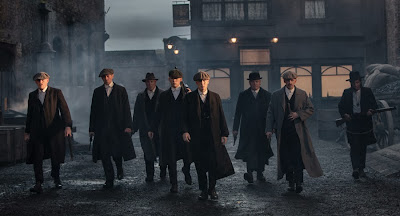 I’ve only managed to watch two episodes of the BBC drama Peaky Blinders so far, but I quite like what I see.* It seems to fit into an interesting sub-genre, the period drama with a (post?-)modern sensibility; along the lines of Desperate Romantics and the show with which I’ve seen it compared most often, Boardwalk Empire. What distinguishes these shows from, say, Downton Abbey is that the period details (clothes, décor, contemporary historical references) appear to be for the most part accurate but the script and performances have a swagger and a self-awareness that is strictly 21st century. Once again demonstrating the extent to which Quentin Tarantino has become the dominant cultural influence of the past 20 years, shows such as Peaky Blinders are also packed with references large and small to other media, especially film; so the activities of a gang of Brummie crooks in the years following World War I conjure up The Godfather Part II and Once Upon A Time In America, provided you can imagine Robert De Niro supping pints of mild from a bucket. Or maybe it’s The Long Riders in flat caps. That’s the joy of postmodernism; you can just find a reference point that fits your own prejudices and viewing history and insist that it’s so, and Roland Barthes’s laundry van will squash anyone who disagrees.

In theory, the music should also fit with this theory. The background tunes are for the most part culled from the back catalogues of Nick Cave and Jack White, singer-songwriters whose music survives in the modern rock era while also gazing back at a semi-mythical past of bar-room brawls and devils at crossroads; it’s anachronistic but, hey, Celine Dion wasn’t around when the Titanic sank either. And the diegetic music (mostly Irish ballads and a bit of Puccini so far) sounds pretty authentic. Again, a precedent was set by Boardwalk Empire, which is set in 1920s Atlantic City and has as its theme a song by contemporary psychedelicists the Brian Jonestown Massacre and nobody seems too bothered. 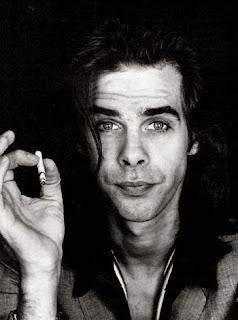 But somehow I am bothered by the use of Cave and White. Part of the problem is that I’m too close to their music; I see how the clanging anvil of ‘Red Right Hand’ fits into the industrial hellscape that is Peaky Blinders-era Brum but to me it’s also track five of the Let Love In album, which I’m pretty certain I bought at Tower Records on Piccadilly Circus on its week of release in 1994. Even more confusing, they use music from Cave’s soundtrack compositions, for The Proposition and The Assassination of Jesse James by the Coward Robert Ford, which inevitably makes me think of those films; not in the vague, thematic sense in which I think of The Long Riders but it a very straightforward, nuts-and-bolts manner of how soundtracks are put together. Which in turn makes me think about how films are put together and before long I’m thinking about where I’ve seen the actors before and the Scarecrow from Batman Begins is staring out the grumpy dad hero from Jurassic Park. Maybe the makers are trying for a spot of of Brechtian Verfremdungseffekt, making you aware all the time that these are just actors speaking lines, that the music is stuck on afterwards, that it’s all just make-believe. And I know this is what Tarantino does with music, but there’s something ever so slightly camp about QT’s deployment of familiar (or for that matter unfamiliar) tunes and I don’t think Peaky Blinders is trying to be camp or funny. Or maybe, as usual, I’m just over-thinking stuff to the point where I can’t enjoy it any more. Maybe I should just drink mild from a bucket.

* Is that enough? I’ve just read the first few pages of Douglas Coupland’s new book and my initial thoughts are that it’s a bad parody of Martin Amis, with occasional interruptions from a bad parody of Bret Easton Ellis. Is that fair?
Posted by Tim F at 7:20 am

Given my preoccupation with contemporary culture it's odd that I had no idea who was playing the music in the background. I will try not to let your enlightenment spoil my enjoyment of the show.

You are watching a programme where people have Birmingham accents, and then complain about the sound of the music?

I think you might enjoy the oeuvre of Mr Cave actually, Padre. Full of redemption and hellfire, and fascinated by St John of the Cross.

What's funny is that the second the first sound came on the show (S1.E1) when Tommy is on his horse...I checked to see if Nick Cave and Warren Ellis were doing the soundtrack. I didn't see them credited so I figured it was just a clone, but heard one of their songs late in the episode. Are they involved with this group or does the show just adopt these songs and add to their original stuff?

Also - I think the music is killer for this show - perfect dark and emotional backdrop. TAOJJBTCRF soundtrack is probably my favorite movie soundtrack of all time. Cheers!

I know you wrote this a while back, but I just have to say thank god I'm not the only one. I'm watching Peaky Blinders on Netflix right now. I love the show. I love the music. They just don't mix well. It's distracting, and often, the music doesn't even fit the scene. I feel like the show's constantly being interrupted by a drunk DJ from the 90s.

Same thoughts here. About the Jesse James soundtrack but also : why would you use electric guitar (season 1 episode 1) in an era where rock did not even begin to be the devil's music ? Beats me.

I know I'm a bit late to this comment thread but the music struck a nerve with me as well. I watched the first two episodes of season 1 (and never finished) but being a Tom Hardy fan (and after seeing Taboo) I've jumped into season 2. And I tell you, hearing Arctic Monkeys instrumentals is jarring for me, they yank me out of the story and make me feel like I'm watching British H&M/Topman commercials when I see the characters striding in slow motion in their three-piece suits and penny collars and such. So much so that I googled "anachronistic soundtrack peaky blinders" and I found this blog post.

I don't think the soundtrack of a period film/tv show needs to be firmly stuck in its time but I think the music being so recognizable irks.

I love the music, on its own. But when paired with the show, it's like they are trying to hard to be cool. The story line and shots on its own are so cool and badass. When they add the music, it's too in your face.

Music track is jarring - the producers tried to do an Alabama 3 a la Sopranos but missed the mark completely.

Very, very distracting is the music to the point I no longer watch the show. And the slo' mo scenes of swaggering down the street grind my gears too... All overly stylized. Should have played it more like Boardwalk Empire.