The role of the cultural critic in the Asian century (LOL)

(Just before I press “PUBLISH” I start to think that the following post might be interpreted as some sort of reiteration of the Yellow Peril scares that began towards the end of the 19th century. It’s not; some of my best friends, etc. It’s simply an observation that, while the cultural changes wrought by technology over the next few decades will be immense we should at the same time be aware of how a shift in economic and political significance towards East Asia and elsewhere will also have an effect on what we consume and how we’re expected to consume it. Whether this is objectively A Bad Thing as such, I leave up to the reader.)

Will Self discusses Mark Kermode’s new book and muses on the technology-driven shift from declarative (implicitly elitist) forms of criticism to collaborative, conversational, nominally democratic models:

At the moment, the wholesale reconfiguration of art is only being retarded by demographics: the middle-aged possessors of Gutenberg minds remain in the majority in western societies, and so we struggle to impose our own linearity on a simultaneous medium to which it is quite alien. The young, who cannot read a text for more than a few minutes without texting, who rely on the web for both their love affairs and their memories of heartache, and who can sometimes find even cinema difficult to take unless it comes replete with electronic feedback loops, are not our future: we, the Gutenberg minds have no future, and our art forms and our criticism of those art forms will soon belong only to the academy and the museum.

Which is all appropriately downbeat and as such makes me think of Eliot (Are the Gutenberg minds inside the heads of the Hollow Men, waiting for their inevitable, whimpering demise?) but I also wonder if there’s something missing in the analysis. There’s a new monied elite coming from China and elsewhere which, unlike previous generations of nouveaux riches feel little need to pay tribute to the purported peaks of Western culture, beyond insisting that their offspring take violin lessons. Sure, they like Western things, but not the sort of Western things we expect educated, successful, wealthy people to like; their Old World aspirations are Versace rather than Vermeer, Louis Vuitton not Louis XIV. Wealthy women see Victoria Beckham as a role model and they don’t see why they should apologise. In the Asian century there is no cultural cringe. (And yes, there are exceptions to this rule but they tend to be rather quiet, marginal ones.)

And this has an impact in the Old World, not only because distances are shortened and national boundaries blurred by the www; as big chunks of London and New York and Paris are being bought up with money made in Shanghai and St Petersburg and Dubai, so the cultural norms of those places begin to apply. There may not be all that many Chinese or Russian billionaires in London but their influence is disproportionate to their numbers. (Hey, did you really believe that the digital revolution would be a great leveller, with one voice on Amazon or TripAdvisor being no louder or softer than another, no matter the size of the owner’s bank balance? How sweet.) And if they, rather than the Carnegies or Guggenheims or Gettys are to be the go-to guys for philanthropic munificence (I can’t see state funding for the arts existing in another two decades, given the prevalent double-whammy of austerity and sneering philistinism) how will their tastes – or lack thereof – trickle down to affect the wider cultural life of Britain and other countries? If you were running a big gallery, would you tell someone waving an eight-figure cheque that no, you won’t run an exhibition devoted to Donatella Versace even if she’s BFF with the donor’s trophy wife? I mean, it’s all Art, isn’t it? Isn’t it? And sure, the vast majority of British people would never set foot inside the National Gallery or the V&A or any of the Tates; but what goes on in them has a massive effect on how Britain presents itself to the world and ultimately, incrementally, over decades and generations, on how Britain feels about itself.

When people grumble about how immigration changes societies it’s usually a question of numbers and demographics, with dire warnings about how more Mohammeds are being born in the UK than Joshuas, as if one Middle Eastern name is scarier than another. And, yes, there are very real problems associated with such changes and the political elite has been very bad at addressing them, either damning any worries as being tainted with racism or going to the opposite extreme with the likes of the inept and crass “GO HOME” van campaign. And if we really were operating in a digital democracy the presence in Rochdale or Leicester of several thousand people from the backwoods of Bangladesh would be more significant than how a few rich Chinese guys opt to extend their largesse in London. But we don’t. The world is still analogue and still ultimately plutocratic. The cultural time bomb is being primed not by bearded Muslims in northern industrial towns but by people who are assimilated enough and, more significantly, wealthy enough to slip under the radar of even the most paranoid demagogues of the BNP/EDL/UKIP school. And that could lead to a “reconfiguration of art” that would dismay Self and Kermode even more. Not with a bang but a ker-ching. 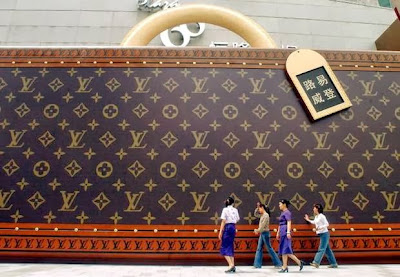 PS: In more immediate terms, this touches on the areas I was discussing in my previous post. Here I’ve included links that might explain references to a TS Eliot poem and Donatella Versace. Different people might have required one or the other or both or neither and I made a belt-and-braces decision based on that. But as the centre of the world shifts eastward, the criteria upon which I base such decisions may shift as well. Please read the very common-sensical response of The Chicken’s Consigliere to said post and hope that more people think that way, otherwise I think I might just go insane.

PPPS: Back to the Will Self piece; Simon Price gets stuck in. “A world with uncriticised art gets the art it deserves.” Yes.

PPPPS: (Oct 19) Last night I attended the launch of the Bangkok spin-off of a big, posh Singapore bar/superclub. My inner teenage Trostkyist stared on in horror. I have seen the future and I don’t want to go there.

PPPPPS: (Oct 20) Does it never stop? “Chinese buyers tend to be interested in British popular culture – I’ve had clients who want to visit Tesco because they’ve read it’s where William and Kate shop.”
Posted by Tim F at 9:58 am

I appreciate the links and the mention. Thank you.