A recent article in The Guardian (oh Lord, how many times has he started a blog post like that?) queries the notion that one’s online activity offers an accurate snapshot of the self. The author, the deliciously-named Rhiannon Lucy Cosslett, muses:

Before I read this study, I had assumed that everyone experienced those moments where, when they’re in the process of doing something particularly derivative and cliche [sic], they take a moment to consider what a massive, contrived stereotype they actually are.

Well, I don’t know if everyone has those moments, but I certainly do. Despite my outward insouciance, recently I’ve been getting terribly self-conscious about what I post on social media and what others may infer from it.

For example, yesterday I posted the following image on Facebook: 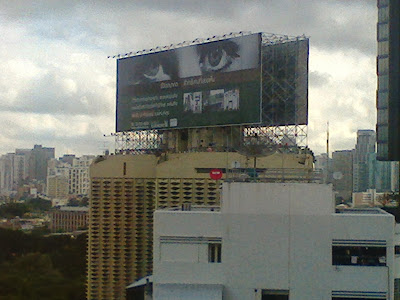 This is what looks over my left shoulder. It makes me wish that Luis Buñuel had directed a mash-up of The Great Gatsby and Nineteen Eighty-Four. Mind you, that pretty much sums up how I feel about Bangkok.

Which is all well and good, but depends for its full effect on the reader having seen a few Buñuel films, read both Fitzgerald and Orwell and maybe having spent a bit of time in BKK, thus understanding how big, staring eyes fit into the scheme of things. Can we assume such things these days? Are they in the canon that my average Facebook follower should be expected to know? What about blog readers? Do I have to spell it out or can I rely on you to Google in the gaps? Am I just a great big steaming intellectual snob? Is that such a bad thing anyway?

Then, a few hours later, someone on Twitter was enthusing about how wonderful it was that Peter Higgs had gone away on holiday without a phone so he could avoid the inane questions of journalists when the news of his Nobel Prize was announced. I replied that this was indeed pretty cool, but Doris Lessing’s reaction to winning the literature prize in 2007 was even better: 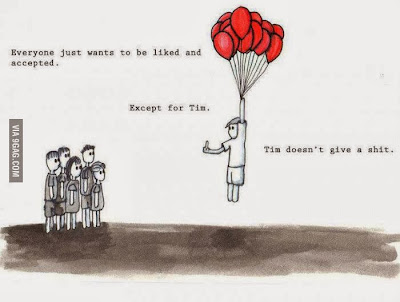 My favourite EVER simpsons joke is when Sideshow Bob is trying to get out of the crime of having shoplifted (dressed as Krusty) anyhow the defence of Krusty rests on his having stolen the Springfield Review of Books. The defence lawyer goes "Krusty would NEVER have stolen this magazine - because he's illiterate!!' (gasps from the gallery)
And Sideshow Bob yells "You don't have to be able to read to enjoy the Springfield REview of Books! The last issue had a very amusing cartoon of Susan Sontag!"

I never get any of these things, but I can enjoy the amusement vicariously. Like watching monkeys flick around really high-class shit.

I'm guessing your friends on FB know what you mean, or they've reset their security settings. You are probably all set there. I have to google and fill in the blanks, but I don't mind. I wouldn't want you to feel self-conscious or change a single thing. I like you just the way you are. And while you are exchanging witticisms about nobel prize winners, my ilk are posting and commenting on cat memes. You wouldn't really want to be doing that, would you? That's why I come here. And now I have to go google Doris Lessing. I'm ashamed and sorry. But that's how we learn, no?

A friend who lives in Belsize Park (Doris Lessing territory) says the local paper, the Hampstead & Highgate Gazette, had headlines reading "Local Woman Wins Lottery" when she won the Nobel. When two other local literary women heard the news one said to the other "Oh God, there goes the neighbourhood."

I like, emmat. The question is, do you have to be literate to laugh at jokes about post-literacy?

I don't think anyone's ever paid me a higher compliment, Sam.

Well, exactly, CC. I don't get how Google's so successful when so many people seem unable to use it to work out what I'm on about.

Anon: One imagines that the staff of the Ham and High all smoke pipes and juggle their day jobs with directorships at Faber & Faber.

It's ok to be a middle-class w***ker as long as one has self-awareness of the fact. The fact then becomes ironic, which is fine.