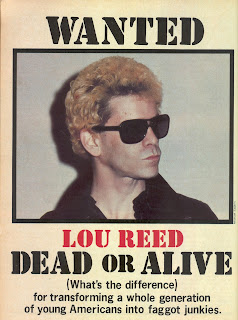 I was going to write something about Lou Reed and about how I discovered the second Velvet Underground album when I was about 15 and how it changed, well, pretty much everything, even though I never started a band. But then I read somewhere something that Lou himself had once said: “To me, ‘RIP’ is the microwave dinner of posthumous honours.” And there was enough RIP-ing going on already; damn, even Miley Cyrus had something to say, tweeting between the twerking. And then I was going to write something concerning the odious Daily Mail article about Lou, fingering through his entrails before his corpse was cold, tutting and sneering over his various debaucheries, much as that squalid rag did for the blameless Stephen Gately. But as I wrote it I began to feel the bile rising in my throat and the veins throbbing in my head and quickly realised that the whole repulsive article was a massive trollfest and for once I wasn’t going to be lured. Better to remember the real reason we’re mourning him wallow in the delicious playlist that Everett True compiled in the old grump’s honour.

But I’ll leave the final word to Paul Gambaccini. I have nothing in particular against Mr Gambaccini; he once gave me some chocolate and a Nancy Wilson album for being able to name five famous Belgians and several years later, in absentia, prompted a heated public argument between me and another journalist over 12 cans of Guinness and a publishing contract, but that’s a couple of stories for another day. No, I just think that his tweeted response to Lou’s death (to which I was alerted by Ern Malley) says, in its own strange way, something about media – social and otherwise – and celebrity and journalism and all sorts of matters. Take it away, Gambo:

I was at two private gatherings late Sunday. I don't take phones to such occasions. Thus I missed sad Lou Reed news & the chance to comment.
— Paul Gambaccini (@PaulGambaccini) October 28, 2013


PS: And then there’s this, from Metro, via The Poke and Gavin Martin: 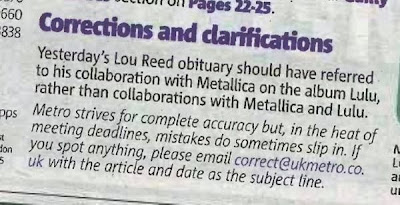 PPS: And Suzanne Moore is very good on why Lady Gaga is a poor substitute for Mr Reed, among other things.
Posted by Tim F at 7:20 am

Didn't he play a bit of bass on "To Sir With Love"?

I thought this was one of PG's best:

"Paul Gambaccini ‏@PauIGambaccini 17h
Only just heard about the sad passing of Buddy Holly. I was creosoting the fence and had left phone in the kitchen for safety."

I would like to hear your "discovering the second VU album" story - if only to compare it with my own. Sure, Lou wouldn't approve, but let's face it: he disapproved of a lot of things that are blameless or even laudable. That was part of his appeal.

Anyway, for what it's worth, here's mine.

In 1983 the eighteen year-old me was in the grip of a severe, three year-long Joy Division fixation. Then one day I happened upon a "Nice Price!" copy of White Light/White Heat in Our Price Records. I knew the Velvets had a cool reputation (and an intriguingly weird name) but the only song of theirs I'd heard was the Divvy's live cover of Sister Ray. That was awful, even to a Joy Division nut like me, but, still, if they rated them then maybe the original was worth a spin.

Back home I saw that Sister Ray took up most of side two, but I was too lazy to faff about lining up the needle with the start of the track so I decided to just to play the whole side. After all, there was only one other song, so it wouldn't be too much of a chore to hear that first.

The next four minutes changed my life. That's not hyperbole or me getting sentimental because a rock icon's bit the Big One. It's a simple fact. From the opening few seconds of squealing guitars and drawled lyrics it was like a whole new world had been opened up to me.

The song, of course, was I Heard Her Call My Name. Not one of their most famous tracks or even (in retrospect) one of their best. Yet it was astonishing. It was "sort of" a standard pop song, yet they were playing it as if they wanted to kill it. From what I could gather of the lyrics, it was about a guy remembering how a dead woman once cared for him. Sort of. It was hard to tell if Reed was joking - and that was fantastic. His deadpan drawl was cool, detached, ironic and despairing all at the same time. And on top of that you had the visceral, pounding music like a quaint shed being smashed to pieces. I'd heard heavy rock before but nothing done with such insouciant disregard for the listener, the rules of the genre... for everything, basically. The track was only four minutes long. The last two of those were simply the band making a nihilistic racket. It was thrilling beyond words.

And then Sister Ray came on.

Lou never said that thing about RIP being the microwave dinner of posthumous honours.

The Daily Mash story you tweeted was the most touching and somehow spot on thing I saw on social media about him.

What a rich light conversation! Glad I stumbled in. My tribute to Lou today is not less conventional, but has the virtue of a gadget that plays 'perfect day' ........

That's the Gambo that hangs out with Jacob Rees-Mogg and Mrs Stephen Fry, Rog.

Pretty much the same story, Philip. Same year, even. Except my intro was Bowie's White Light/White Heat, so I started on side one.

Oh that's a pity, William. Mind you, it's only in the midst of the mourning that I discovered Eno never said that thing about everyone who bought the banana album starting a band.

That was rather lovely, wasn't it Annie? I think he would have liked it (even if he wouldn't admit).

Good news, Tim! The Eno attribution is about right (it's usually a little mangled but enough in the area).

Yes! It's here! A nice person on Twitter told me. Moral: be wary of urban myths about things being urban myths.

Doubly ironic that Lou Reed must have written some of the most politically-incorrect songs ever, with regards to male/female relationships, with his Berlin Opus mainly about the destruction of Caroline by Jim, who "shoulda broken both her arms" because of her sleeping around. Jim's delight in having her kids taken away is just so 2013.

Lou must be laughing his cynical head off. I wonder if he's met Jimmy Savile yet.

Rog - like it.
I also liked the less fashionable - Good evening Mr Waldheim. Pontiff, how are you?